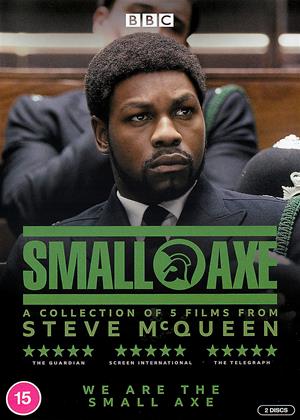 These films were very informative. I can see I lived through this period without realizing the tragic situation. I didn't even suspect it. The films are remarkably well done without soapiness or self pity, just the facts. I would love to talk to McQueen to tell him about some of my experience in teaching and some of the misunderstansting on both side. As an old teacher, I know how difficult it is to change mentalities and the cinema is a powerful way to do it. Mangrove is my favourite episode. The episode where a black man wants to be a policeman to "change the world" is diheartening. The film ought to be shown in every school and police schools. As for the episode on education, I have to say I saw this kind of attitude towards white kids because they were over gifted! It looks as if some teachers don't like when kids are too intelligent. I have always wondered how can one be a teacher and have prejudicies, whatever the prejusicies are.

Must be seen by every one.

Many questions have arisen if Small Axe is a TV series or one long movie anthology spanning six hours. Whichever it is, the five films assembled by Steve McQueen are a fascinating portrayal of black culture within the United Kingdom during the later part of the 20th century. They’re a mix of poignant racial injustice, systemic injustice, and even blissful moments of happiness.

The first film, Mangrove, is by far the best and not just because it’s the longest entry or the more complete character arcs. It tells the tale of the Mangrove restaurant established by immigrants and how the business had to endure a constant barrage of police raids and harassment. After some rousing bouts with police, a courtroom drama unfolds for the second half of the film and it’s exceptionally aggravating. Not only does this film present a narrative as engaging as it is insightful but it’s edited in a reflective manner, having enough faith to rely on passages amid still photos of the era. Sure, it seems akin to Spike Lee’s approach of historical dramas but it works rather well here for not relying heavily on this aspect, peppering it in among the racial tension.

Lovers Rock is the lightest of stories, following intersecting lives amid a house party. Amid the loud music are people falling in love and finding it hard to get along. Some fall in love while others fall from grace but all of them seem to come together on the dance floor for one exciting night. Though ending on a pleasing note, one can easily feel the tension that boils just outside the door, always kept at bay once the music turns on.

Red, White, and Blue focuses on the topic of police corruption from the inside, where the first black man of his district goes through the motions of becoming a top officer. Once he attains that position, however, he finds that he is still undermined in his department and left alone in the field when calling for backup. There’s no easy resolution to this picture, only showcasing how racial injustice has a long road to go, where even those serving are not seen as equal. Though troubling for featuring an ambiguous ending, it’s a tale that will certainly haunt.

Alex Wheatle takes a look at the life of the titular character who grew up trying to play by the rules and still found himself being imprisoned and punished for no wrongdoings. Only through reflection and some exchanges in prison that he starts to learn what wasn’t taught to him, realizing the cold hard truth about how the system is stacked against him. By the end of the film, Alex has some hope for the future but it’s a dream that can not be achieved alone.

Education plays a bit more like an afterschool special for shifting to the flaws within the educational system. When a struggling black student finds himself unable to keep up with the public schools, he’s forced into a special needs school that is woefully inept in staffing and curriculum. This subject is one of the most troubling because the only viable solution to this situation is to favor a co-op school run out of somebody’s home. It is there the child finds he can succeed but it’s also a bittersweet ending for realizing this may have been the only way out for those failed by the educational system.

All five films have been directed by Steve McQueen and they paint a rather complete picture about the race issues in the UK. Showcasing the hardships and pleasures of the eras of uncertainty, there’s a complex nature to the immigrant and black experience that feels as though it’s only been slightly touched upon in lesser media. While some entries are stronger than others, the majority of the films are fascinating in their own specific nature of targeting poignant issues.