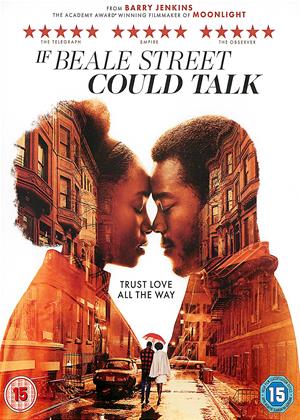 Reviews (15) of If Beale Street Could Talk

It appeared that the majority of the film was shot on a budget .... zero amount paid for lighting ... majority of the film seemed to have been shot it the dark .... first 30 minutes were okay ..... rest of it was just totally dull .... it lumbered on and on with heavy dialogue and clunky acting ..... great if you need help getting to sleep.

At the end was just wanting it to finish and could not care less about the characters fates.

Pedestrian - If Beale Street Could Talk review by IG

A rather dull film all round that moves at a snail's pace through a story without any discernible merit or purpose, overlong and pointless.

A Beautiful Film. - If Beale Street Could Talk review by RW

Considering that the source material is literary fiction I guess you could call this literary cinema, there isn't that much in the way of plot but what there is is thought provoking and moving. This film deals more in emotions, about the human condition, about survival and struggle. It is a slow paced film but that lets you fully absorb the dialogue, the acting, the technique, the score; all of which leave you mentally rewarded. This is not a Saturday night party film, but it is a beautiful film.

If you're looking for a rip-roaring, fast paced yarn of punchy one-liners, this ain't it.

If you're looking for slow, thoughtful, meaningful and sympathetic story-telling, this is entirely for you.

Moving, painful but real and eye opening. - If Beale Street Could Talk review by SD

A moving story with a fantastic cast rich in dialogue and strong and sobering in it’s message. Highly recommend this a loving story amidst prejudice and injustice. Beautifully acted by all.

This film had such overwhelming and widespread praise from the critics that I just had to see it. It started well, and the interactions between the (almost universally black) characters in the first reel were engaging and dynamic. But then the story didn't really seem to go anywhere, and while the atmosphere and cinematography were very good, the film never really engage with it. I admire it, but I didn't really enjoy it.

I have NO idea how this movie was even nominated for Oscars. Oh wait, I do - it's an almost total black caste and now the Oscars has de facto quotas for African-American actors. How making all black movies represents progress I do not know - it is pure segregation, whether in great movies like Moonlight or dross like Black Panther. Oscars so wrong. Imagine an all-white movie these days.

Not sure if this is what was in the book and I am sure this soapy family drama would work better as a novel. James Baldwin was a great and brave writer - black, yes, but also gay, when the African American community was as homophobic as it remains now. He is a better writer than this movie suggests. This story is 'of its time' maybe - early 1970s. Remember that many white men have been wrongly convicted of crimes too - a great many. Race is not the only game in town.

Very disappointing minor movie that should never have come near to getting nominated for Oscars.

A worthy narrative and uniformly good performance aren't quite enough to sustain this film. The first 45 minutes are quietly effective, with a simmering intensity. Some of the earlier scenes - in particular the one in which Tish's family break the news of her pregnancy to Fonny's (mostly) disapproving family - really crackle with drama. Unfortunately, around half way through it all just starts to fizzle out. There is no variety to the narrative methods employed here as Barry Jenkins maintains a languid, quiet tone for the full duration. Many of the more interesting secondary characters drift out of the film as it progresses, and the themes introduced in the first half of the film are not really developed any further. A watchable drama but not likely to live very long in the memory.

Totally involving, beautiful and powerful - If Beale Street Could Talk review by TS

Highly recommended, premier league cast and a terrific score. A marvellous adaptation, beautifully shot and paced. There are some really silly negative reviews on this site.....ignore.