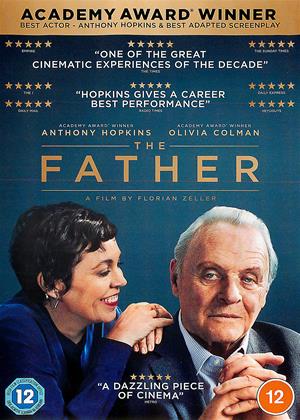 Reviews (4) of The Father

Just watched The Father, for which Anthony Hopkins won his second best actor Oscar. For me he's never been better than in this really moving piece of cinema.

I wasn't expecting much really, and saw it on a whim, but I'm so glad I did. It's merciless in its unsentimentality. It's too truthful, and more frightening than any horror film I'll see in a while.

Trust me, this was truly immersive and if you like Anthony Hopkins, I can only think of one other occasion he was close to being this good, and that was in The Remains of the Day. Olivia Williams and Olivia Colman were so good too. An intelligent yet very accessible drama. More like this please!

Almost heartbreakingly sad this has a central and very moving performance from Anthony Hopkins as a man falling deeper into the abyss of dementia. There are brilliant performances all round in fact not least from Olivia Colman as the daughter struggling to cope with her Dad's worsening condition. There is humour in this film especially in the first scenes but ultimately this is a sad film and indeed at times quite frightening too. Hopkins is a retired engineer living in his well appointed London flat and regularly visited by his caring yet exasperated daughter Anne. He's cantankerous and subject to sudden mood swings caused by his dementia and has a history of driving away the carers that Anne finds for him. Where this film is clever is what you see and hear as the viewer may or not be true as we view the world through Hopkin's eyes and his reality isn't always everyone else's. It's a remarkably well written and structured film and we are introduced to characters at various points that may or may not be real also. As the man becomes more confused so the stark horror of this awful condition become ever more clear. The support cast, as I said, are magnificent and include Olivia Williams, Imogen Poots, Mark Gatiss and Rufus Sewell. This will have you shedding tear but it is a touching film too and a must see for Hopkins and Colman's tour de force performances.

What makes this film special is the towering performance of Anthony Hopkins who is always a joy to watch. I can watch him in anything.

By contrast, I find Olivia Coleman (stage name) annoying and irritating, so just tolerate her.

The script comes from a stage play, and the director stated he wanted to adapt it to be cinematic and not stagey - nevertheless, it is a bit stagey. And it is very French - it feels French, somehow. Bourgeois Paris transplanted to London maybe? The original play was set in Paris.

I know the script is meant to reflect the confusion of dementia; however, it is still confusing and not all is resolved in the end. I watched this alone but would have liked to watch it to others maybe so they could explain it to me. The whole issue of France and Paul... (no spoilers). Baffling. I may watch it again one day and see if I get that bit.

Also irritating - as in so many films - is the idea ordinary British people like in such houses and apartments (posh ones are not called flats apparently). This is Maida Vale London W( where a 2 bed flat in a mansion block costs £1.2 million minimum - the flat here is larger, so 1.5 or 1.8 million maybe. And then the daughter has a similar flat too. So this is \a seriously rich family, Nor ordinary middle class British people at all.

This is annoying and wrong - no wonder Americans all seem to think we live in Downtown Abbey! Most Brits like in small flats in London and normal suburban semis and terraced houses otherwise. Not this millionaire luxury. This may be that Paris Bourgeois effect again. But it is what I call the PADDINGTON EFFECT as the Browns in that film live in a mansion which would cost at least 3 million quid ad maybe five. In the Paddington books, the Browns live in an ordinary semi. Film-makers deliberately posh up movie adaptations to appeal to American and world audiences. The Downtown effect again. JUST STOP IT!

The DVD comes with a half hour zoon interview with him and the director and Olivia Coleman which is illuminating.

All in all, not the masterpiece people claim, but good enough. Up to now though, I suspect TV drama has dealt better with issues of dementia and mental health generally.

Underwhelming - The Father review by Johannes

Beneath the shifting surfaces of The Father — many slight tricks are hidden up Florian Zeller's sleeves — there is little to hide the simplicity of its skeleton. Anthony Hopkins plays a man in decline, losing control of his environment day by day, and inevitably his memory. Hopkins' performance more than outshines his fellow cast, whose peripheral roles never properly amount to anything, and bow, reverentially, to his masterclass. The film is wrapped around his little finger; it is the Oscar vehicle any actor might dream of seizing. The Father eventually dissolves into poorly scripted goop, where themes of "losing his leaves" and missing watches are underlined, and underlined again.