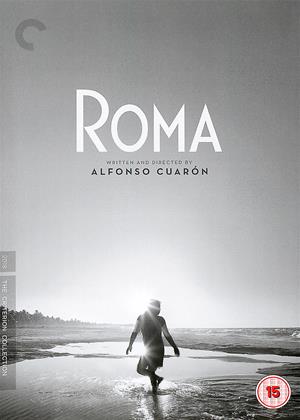 Beautifully filmed and acted with a superb soundtrack giving you a real sense of life in Mexico City. The extras on the disc include a fascinating film about the making of Roma which is a real bonus.

In this superb film, Mexican director Alfonso Cuarón uses a large canvas to tell the story of 'ordinary' lives that are, of course, extraordinary. Shot in black and white, the film is set in Mexico City in the early 1970s (apparently a re-creation of Cuarón’s home as a child), and centres on a young indigenous woman who works as a maid for a middle-class white family that’s in danger of falling apart. Cuarón uses one household on one street as a synecdoche of the city (the country?), working on an epic scale but with a distinctly personal sensibility with the effect that the film is less of a drama than a meditation on the past or a dream.

The film is set for the most part in a neighbourhood where families live behind locked gates, and where a myriad of servants busily keep homes running. In one such house, Cleo (the quite wonderful Yalitza Aparicio) lives with and works for a multi-generational family that seems incapable of doing the slightest thing for itself. A series of events slowly upends the stability of this world, and the film includes an earthquake, an unexpected pregnancy, death and betrayal, but carries you through with the sheer power of its humanism. In one of the most astonishing sequences, Cleo and the family’s grandmother, Señora Teresa (Verónica García), watch a student demonstration turn into a police riot through the window of a furniture showroom. Cuarón doesn’t identify the incident — apparently known as the Corpus Christi Massacre of 1971 — but gives us harrowing flashes of chaotic violence and human suffering.

Like Cleo, the camera is often mobile, anticipating and following her movements like a faithful companion, whilst the family’s four children tend to blur into a cacophonous but rather charming little mob. The constantly-on-edge mother, Sofía (Marina De Tavira) is unfairly berated by her husband and she, in turn, occasionally rebukes Cleo, a chain of exploitation that Cuarón represents coolly, occasionally letting a camera movement comment for him. There's a minimal plot, and this, together with its length, might put off some, but for those with patience, there's much to admire in Cuarón's vision of a woman and a world shaped by a colonialist past that inexorably weighs down the present without being at all heavy-handed - the director's, and Cleo's, viewpoints are instead created via visual choices, staging and camerawork. There are many scenes that can be truly called 'great', perhaps particularly two stunning sequences, one involving childbirth, and one towards the end involving dangerous waters, that are viscerally terrifying and emotionally overwhelming.

Few of the male characters come out of this tale very well, and of course the film is dedicated to Liboria Rodríguez (“for Libo”), the woman who raised him, who is beautifully depicted as something of a stoic, loving, heroic figure that is totally compelling.

A compelling portrait of society in 70a Mexico through the life of a young woman servant. All the relationships and characters are lovingly shown as individuals.

The film quietly but powerfully dissects issues of class, power, gender and religion without losing any of its humanity and complexity.

Brilliant! I loved this film!

Real life Mexico, and tender too - Roma review by PR

Excellent film! It is a feminist film in the best possible way, and a fair description. No tear-jerking, no political messages, just…plain life with its natural drama. Of necessity, it will be much more poignant to the likes of me, who knew Mexico in the 70s, but plenty there to appreciate by everybody.

Here’s the plot, such as it is, based on the childhood of director Alfonso Cuaron: a maid goes about her business, looking after a well-off family in 1970s Mexico City. That’s it. A glorified but mundane soap opera. Even worse, it’s filmed as a documentary-style fly-on-the-wall piece. We observe the characters rather than engage with them.

And yet… Cuaron films in coruscating black and white with such astonishing depth of field that his shots are amazing to look at. Never has there been so much going on in a frame since Citizen Kane. Most films focus on one thing and leave the rest of the frame out of focus. In Roma everything is in focus, enabling the viewer’s eye to rove around it at will. There’s a scene in a packed cinema, shot from the back stalls, looking to the screen past lovers in the foreground, that is simply beautiful. When Orson Welles adopted the same technique (although often using split screen to obtain the effect) it was breathtaking. Roma has that same ground-breaking feel about it.

If only there was something to engage the emotions or the intellect, this would be a masterpiece. Instead, it will have you aching for something, anything to happen. The trailer makers realise this by tempting you with a montage of short scenes choreographed to Pink Floyd’s The Great Gig in the Sky. Be advised that the film itself is nothing like this. It’s full of long static takes, with none of the movement Cuaron used so effectively in Children of Men, and it’s sadly lacking in anything even remotely resembling a rousing soundtrack. There is much to admire in Roma, but many viewers will find it one long bore.

A stunning and affecting film - Roma review by ef

This is compelling viewing, the slow pace allows characters to build convincingly, the acting is superb and the atmosphere of the city is brilliantly portrayed.

There are visual images and scenes which will remain in your head, beautifully shot in black and white. Quite stunning.

Unfortunately, unable to watch 'Roma' as it was in Spanish with no subtitles.

Perhaps a warning should be given to viewers when not in English.

A moving slice of life that we can all recognise, spiced with a down-town Mexican take on events that seeds the view with both friction and delight

There are enough good reviews of this film, and I agree with them, it is a masterpiece, both from the outstanding photography, development of atmosphere, and the considerable exercise of emotion.

Subtitles, by the way, can be switched on from the main menu.

Note, it is well over 2 hours and there is no drama or character engagement in the first hour at least.

It is slow and detached.

There are a lot of good camera shots, for fans of cinematography. But viewer engagement totally lacking.

We needed to get to the dramatic tension before the first hour had passed (barely half way through the film!!)