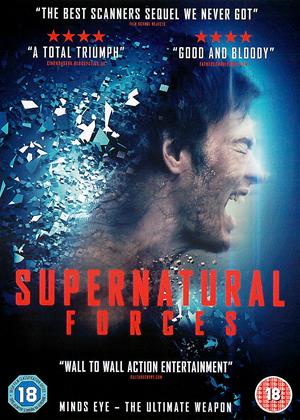 Synopsis:
Zack and Rachel were born with incredible psychnkinetic powers. When word of their supernatural talents gets out. they find themselves the prisoners of a deranged doctor intent on harvesting their powers. After a daring escape, they are free from his sinister institution, but the evil doctor will stop at nothing to track them down so that he can continue to use their gifts for his own horrific purposes.
Actors:
Graham Skipper, Lauren Ashley Carter, John Speredakos, Larry Fessenden, Noah Segan, Matt Mercer, Michael A. LoCicero, Jeremy Gardner, Patrick M. Walsh, Brian Morvant, Josh Ethier, Susan T. Travers, Chuck Doherty, Jesse Dufault, Graham Reznick
Directors:
Joe Begos
Producers:
Joe Begos, Josh Ethier, Graham Skipper, Zak Zeman
Writers:
Joe Begos
Aka:
The Mind's Eye
Studio:
High Fliers Video Distribution
Genres:
Horror, Sci-Fi & Fantasy

A bizarre concoction of equal parts horror and gore, Supernatural Forces plants original ideas that end up telling the same story we’ve all seen throughout the past years, in a stagnating indie horror genre that just cannot give birth to a film that would stand firm on its own merit – without serving as a throwback bone to the 80’s and 90’s scary cinema masterpieces. Still, Supernatural Forces cannot be easily dismissed: a quality soundtrack, an eerie atmosphere and a solid camera work make for both a fun and a tense viewing that ultimately ends up on a whim.

For a low-budget body horror take, Supernatural Forces succeeds on several levels as mentioned above. Problem is: the good stuff is spread so far and few between that one almost forgets about when one senses the credits will start rolling toward the end. Homages to 80’s Cronenberg features are thrown in without good measure, possibly to quench the thirst and appetites of veteran moviegoers which were live witnesses of that era when synth-wave rock blossomed into creation. Supernatural Forces utilizes some very creative approaches toward embodying the 80’s music, atmosphere and ultimately: gore, which are not quite enough instances for one to appreciate the flick on its own merit.

Or in short: Supernatural Forces works as a throwback iteration, but falls flat as a low-budget horror piece made in 2016.

The film, among other themes, tackles psychokinesis and telekinesis: with it being the main driving force behind its story. Characters huff and puff and blow around their powers like it’s no one’s business, yet the impact they produce can be felt by everyone within the rectangle space of the screen by some extent. So far protagonists Graham Skipper, Lauren Ashley Carter and John Speredakos as the main antagonist respectively show their wide emotional acting range and are quite believable at that.

Unfortunately, it doesn’t take long for everything to fall apart in regards to the film’s plot, coherence and meaning. One is left disappointed when the final resolution takes place (and I’m not referring to the finale’s plentiful amount of gore), and wishes for an alternate reality where Supernatural Forces would actually make sense upon its inevitable end.

In the end, with its countless shortcomings and weak plot, Supernatural Forces will go down in history as yet another attempt at Cronenberg-like flicks that end up only carrying aesthetics - and not the essence that made those movies great. Nevertheless, I would personally recommend for director Joe Begos to be put on a lookout, since you never know when a surge of creativity will bring along something great to accompany it.

Sadly, this is not it.