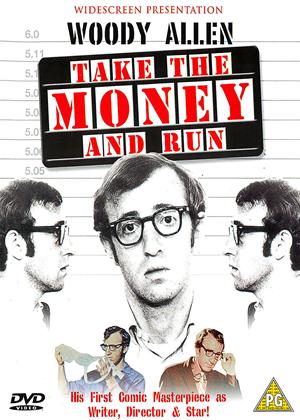 Synopsis:
Psychologically unfit for life as a child, Virgil Starkwell (Woody Allen) begins a life of compulsive petty crime. Before reaching the age of 25, he has become an extremely inept criminal who is known to police by five aliases. For a while, however, his life seems to change when he meets and falls in love with the beautiful Louise (Janet Margolin). But it's not long before his compulsive ways return and he sets out to rob banks and fail in increasingly fascinating and hilarious ways.
Actors:
Woody Allen, Janet Margolin, Marcel Hillaire, Jacquelyn Hyde, Lonny Chapman, Jan Merlin, James Anderson, Howard Storm, Mark Gordon, Micil Murphy, Minnow Moskowitz, Nate Jacobson, Grace Bauer, Ethel Sokolow, Dan Frazer
Directors:
Woody Allen
Writers:
Woody Allen, Mickey Rose
Studio:
PT Video
Genres:
Classics, Comedy

Rent other films like Take the Money and Run

Reviews (3) of Take the Money and Run

Zanier than Allen's later films, this is a spoof-type film, with influences apparent from Marx Brothers movies and many Pythonesque moments.

Whilst being amusing, the last twenty minutes dragged a bit. This is of a higher quality than a lot of spoof-type films, largely due to the momentum maintained throughout the film, with no individual scene over-indulged in.

Recommend viewing as an introduction to Allen's distinctive jazzy approach to film.

Test of time - Take the Money and Run review by JD

Most comedy from 1969 would be distinctly dated. This is not. Woody Allen is not everyone's taste but if you like silly, done well this is excellent. As an example his parents have disguise glasses with large noses and bushy moustaches as they are too embarrassed to be interviewed without. You might find this pathetic or, as I did, very funny.

I sentence these jokes to 82 minutes of hard labour... - Take the Money and Run review by Count Otto Black

This is supposed to be Woody Allen's first "masterpiece", but, like all his earliest work, it shows that he still hasn't shaken off his roots on the stage and the small screen. Basically, this is a series of sketches on the theme of bank robberies, prison breaks, etc., interspersed with Woody doing his usual stand-up schtick. Which means we get plenty of scenes of him moaning about being a nerdy failure who is unattractive to women and extremely Jewish. This kind of witty self-deprecation works better as stand-up than in a movie, where instead of saying these things to us, he's saying them to a beautiful young woman, who, having just been told all the (very convincing) reasons why she should run a mile, falls in love with him because the script says so.

Some of the jokes are good. The basic idea of a hopelessly insecure man robbing banks very apologetically would make a great sketch, but how many variations on this theme are there? Fewer good ones than we see here, I'm afraid. And some of the writing is frankly lazy. For instance, Woody's embarrassed parents conceal their identities during a TV interview by wearing those joke shop "Groucho glasses". It's vaguely funny the first time, but we cut back to them every few minutes for the rest of the film, and it's the same "funny" image every time. A running gag would be if their disguises got progressively sillier until by the end of the movie, they were dressed as pantomime horses. Done this way, it's barely even a gag!

Similarly, the scene where a sheriff, who is looking for six prison escapees who are all chained together, fails to notice that the six men he's talking to are all chained together, falls flat because the joke is so feeble. The sheriff is too stupid to spot the screamingly obvious. That's the entire joke. If the convicts had placed themselves so that the sheriff couldn't see the chains because of objects in the way, meaning that they had to keep changing position as he walked around the room until they were all in ludicrous postures, that would have been a lot funnier. But it would also have taken a lot more takes to get it right, so maybe they simply couldn't be bothered.

What this movie looks like is an episode of a sitcom called The Woody Allen Show dragged out to three times its natural length. And the sequence in which a blackmail subplot causes our hero to suddenly become a ruthless killer who attempts to stab a woman to death with a carving-knife, which they obviously threw in there because they couldn't think of enough bank robbery jokes and needed another crime for him to be useless at, makes a character we're supposed to find loveably inept appear genuinely evil, and doesn't even seem to fit in properly with the rest of the film. Still, tastes differ, and if you like those later Pink Panther movies Peter Sellers only did for the money, or even the ones he didn't do at all because he was dead, you'll probably love this.