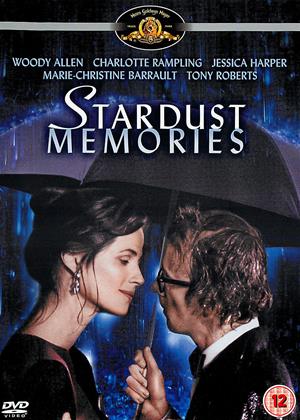 After the commercial success of Manhattan, Stardust Memories suffered a huge critical backlash accusing Allen of narcissism and arrogance and of mocking his audience. The director responded that his character in the film (an actor/writer/director) wasn't modelled on himself. Which felt a little disingenuous.

I like the film. It mimics Fellini's 8 1/2 and just as much Sturges' Sullivan's Travels, but then, his films always had referred to other great film makers. It utilises dreams, visions, fantasies and flashback. Woody goes to New Jersey to a festival showing his work and is exposed to a crazy hyper-exaggeration of the celebrity experience of superfans, critics, groupies and rivals.

The film jumps from Stardust Memories, a film made by Woody Allen, to the surreal films made by his character Sandy Bates, in a really satisfying, and clever way. It's kind of an experimental film although perhaps not as much as when Fellini first made it.

I wouldn't expect it to be a crowd pleasing hit. But it is far more entertaining than most head-movies and it effectively analysis the value of being a maker of comedies within a variety of contexts. Maybe it's not as funny as most of his films, or as satisfyingly dramatic as his recent hits of the late seventies. But it has some startling moments. Everyone remembers the aliens who travelled across space to tell Allen/Bates that they prefer his early funny films, but there is a particularly  moving scene made up of series of jump cuts of Charlotte Rampling in a psychiatric hospital.