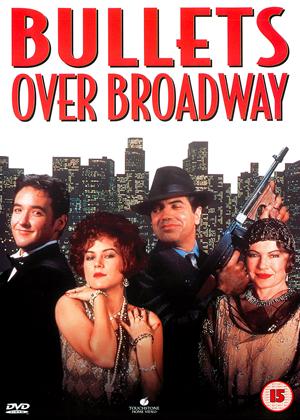 Reviews (1) of Bullets Over Broadway

Woody proved he could still do comedy with this period film about a serious young writer (John Cusack as David Shayne) seeking to produce a drama on Broadway in the twenties, who is backed by a mafia don on the condition Shayne cast his ditsy gold-digger moll, Olive (hilariously played by Jennifer Tilly). Cusack also bags Helen Sinclair (Diane Wiest) an ageing alcoholic diva and the queen of New York theatre. The production runs into hilarious difficulties while secretly being taken over the latent genius of Chazz Palminteri (Cheech), the heavy assigned to keep an eye on Olive.

This is one of the funniest films ever made. Naturally much of that is down to Allen and Douglas McGrath's incredible script, but it's hard to imagine that this cast could be bettered. Diane Wiest as the temperamental egomaniac manipulating the author to improve her role is extraordinary.  Jim Broadbent as a gluttonous English ham and Tracey Ullman as a perky ingenue mothering her yappy Pekinese, as well as Jennifer Tilly, are all exceptionally funny.

The plot complications are ingenious. There is a theme here of whether the true artist is so precious to mankind that s/he operates beyond the law, but it is presented in a comical way which never obstructs the flow of gags.

Broadway in the 1920s is skilfully recreated. The choreography is excellent. The conclusion when Cheech utters Helen Sinclair's catchphrase after being gunned down (thus revealing she had secretly uncovered and seduced the real artist) is absolutely inspired (and apparently ad-libbed). This joyous comedy is one of Woody's best films and was subsequently transformed into a successful stage musical.