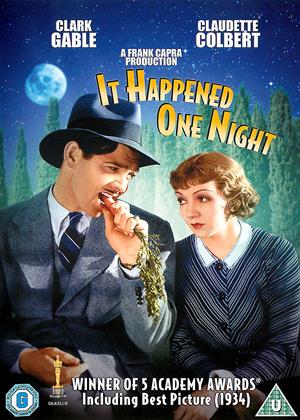 Reviews (1) of It Happened One Night

Screwball Prototype. - It Happened One Night review by Steve

For me, the first, best and most archetypal screwball comedy. This film defines the style, from the heiress (Ellie Andrews played by the incomparable Claudette Colbert) jumping over the side of a yacht into the sea at Miami in the opening scene, to the conclusion as she escapes from her society wedding to playboy waster King Westley into the waiting car of the man she really loves, a working stiff (Clark Gable as news reporter Peter Warne).

This story is also about the depression. Cut loose from her privileges, Ms. Andrews must travel across America and learn to live on an insufficient budget. Warne loses his job at the outset and has to experience the indignity of not being able to provide for the woman he grows to love. They witness the nation's poverty in their journey across country on a bus. Colbert eventually imitates a working woman in one touching and very funny scene.

Over the next decade, Capra's vision of America would become increasingly pessimistic. But It Happened One Night, despite its undertow of real sadness, is a sweet, uplifting experience. It is one of the funniest films ever made, with Alan Hale as a singing motorist particularly uproarious among a brilliant supporting cast. But it's all about Colbert and Gable. There is romantic chemistry there and we care about them. The beautiful photography bestows on them a kind of magic.

Strange that the two stars wrapped thinking it was a disaster. An opinion they revised when it won both of them Oscars, as well as for best film, director, and Robert Riskin for his once in a lifetime screenplay. This is a classic story of romance, which has been endlessly copied, that will speak to people for as long as they go on falling in love.