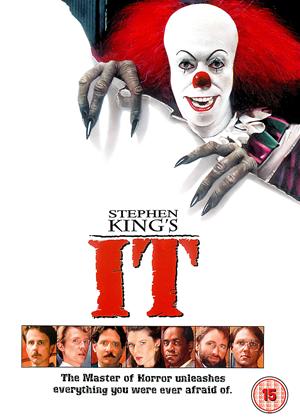 A tale of two halves. - It review by CP Customer

Derry, Maine is a quiet town which hides a dark horrific secret. Every 30 years the town is terrorised by a supernatural being known only as 'It'. Taking the form of a clown named Pennywise, 'It' returns every 30 years and feeds on the souls of the towns children, when questioned the adults of Derry act as if nothing happened, knowing past events are too horrible to even talk about. When a gang of seven children known as 'The Lucky Seven' find they are able to fight back and defeat 'It' they make a pact to return as adults should the terror return. 30 years later, Mike Hanlon, one of the members of 'The Lucky Seven', is alerted by a strange occurrence of child murders. When he discovers that 'It' has returned to Derry, he reunites what's left of 'The Lucky Seven' to do battle once again. The biggest problem 'It' has is that it's a story split into two halves. The first is storytelling at it's best, a genuinely creepy story with great performances from its child cast and easily a 5 star film. The second half is another matter, it's laboured, badly scripted, and with the exception of John Ritter and Tim Curry, has some pretty second rate acting from its adult cast, and with the addition of an abrupt and lacklustre ending, the second half is rather disappointing. Overall, despite the flaws of the second half and mainly due to Tim Curry's insane performance as Pennywise the clown, 'It' just about gets away with being a fairly decent two part TV film, but you do get the feeling it should have been so much better.

Given the hype currently surrounding the new re-make for 2017 and having never seen the original, I thought I'd watch to see what all the hype was about? Stephen King seems to have a thing for exploring the theme of children bonding during the summer holidays, using supernatural, science fiction or horror as a vehicle for telling what in essence are coming of age stories, such as in 'Stand by Me' and 'Dreamcatcher'! Set in what looks like 50's America, this tells the story of seven children who come together as friends. The film then gives us the background on each and every one of them, constantly jumping from their pasts as children, to their futures as adults. In this it become very broken, constantly jumping from past to present and from each character. I was surprised t see that the film was made in 1990, as it had a very dated, early 80's feel to it!

There is some really hammy acting from the adults, although the kids put in a strong performance, but perhaps in all thats simply because they're kids being themselves! Oddly enough they all grow up to become rich and successful in adult life, all except one who becomes a librarian! So again fulfilling that much sought after America dream of success! A very PC cast with the Girl, Black lad, a Jew, a Fat lad, the Disabled guy, the Geek and so on! But the film spends so much time telling us about the characters that there's no time left to tell us the actual story or anything about 'It'! Who is It, what happened, why does he exist, what it is it's purpose remain largely unexplained, except for some very vague reference to a 1700's circus!

The film ultimately spends so much time telling us about each character and flashing back and forth, that when the end finally comes, it's a real let down. I thought, now that you've give us the infill, how about getting on with the story, but it never does, it simply ends! I thought this had a very 'Tales of the Unexpected' feel to it and the special effects were on a par with other 80's movies of the time, such as 'Ghostbusters' or 'Poltergeist'.

In all this is a kids horror story aimed at teenagers, not scary enough for adults, something for teenagers to watch on a Sunday afternoon or in the Summer Holidays! The real saving grace was the only one excellent adult performance from 'Tim Curry' as the Clown, without his creepy and menacing performance, this would have been a real let down!