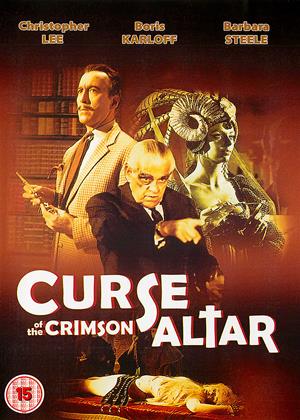 Rent other films like Curse of the Crimson Altar

Reviews (1) of Curse of the Crimson Altar

Spoilers follow ... - Curse of the Crimson Altar review by NP

Starring Boris Karloff and Christopher Lee (with support from Barbara Steele and Michael Gough amongst others), and written by Mervyn Haisman and Henry Lincoln, who introduced The Yeti to television’s Doctor Who – this has all the hallmarks of being a classic. The results, however, are average.

‘Curse…’ opens with a brave and bizarre fetishist torture scene, which recurs throughout in various dream sequences (with some unnerving sound effects – a kind of backward tape loop used as disorientating background noise). The hero of the piece is Richard Manning (Mark Eden) who is sadly less interesting than most of the other characters. He’s searching for his missing brother, but succeeds only in revisiting nightmares and tales of witchcraft whilst staying in a sprawling mansion at the generous behest of Lee’s Morley. It is revealed that Manning is the direct descendent of the judge who condemned a witch to death many years earlier.

Despite labelling the film ‘dreadful’, Christopher Lee puts in what I think is one of his best performances. Understated and absolutely convincing as a man unable to help Manning locate his brother, whilst concealing darker motives. It’s just possible he is the living reincarnation of witch Lavinia Morley (otherwise played by Steele in a green-faced make-up) although this is not explained.

Despite a fiery climax, ‘Curse…’ never escapes from the dullness of its direction. Vernon Sewell also directed Tigon’s ‘The Blood Beast Terror’ the same year with an equally staid lack of ambition.