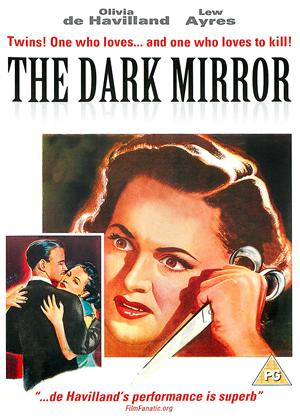 Reviews (2) of The Dark Mirror

Enjoyable thriller. - The Dark Mirror review by BC

Enjoyable thriller with many twists and turns. A fine performance from Olivia de Havilland playing a set of identical twins, one of whom is a murderer.

One of many film noirs after WWII that dealt with psychotherapy, and a smaller subgenre that used the good twin/bad twin motif as the subject for melodrama. The rather schematic plot begins with a murder of a doctor. Ruth Collins (both siblings are played by Olivia de Havilland) is suspected, but when her identical sister Terry also becomes known to the cops and neither will confess which one doesn't have an alibi, the police are checkmated. So twin expert Dr. Elliott (Lew Ayres) takes an interest. He falls in love with one sister, and diagnoses the other as a dangerous... schizophrenic!

It's a screwy story, but fabulous entertainment, expertly assembled by Siodmak, and his cinematographer Milton R. Krasner, who photographs the twins together in the same frame magnificently and keeps the outré concept as realistic as possible.

Krasner was an auspicious noir photographer over many films. The shots of the disturbed twin in the (dark) mirror are very effective and the film is a technical tour de force. There aren't many shadows, I guess because they would have been difficult to match if the frame was subject to multiple exposure. It's still an atmospheric film though, with music by celebrated composer Dimitri Tiomkin.

De Havilland came out of the war transformed as an actor, studied the Method, and she's very subtle as the divided twins, and the divided killer. This was the first of a trio of films for her playing a psychologically disturbed character, followed byThe Snake Pit (1948), and The Heiress (1949). Scriptwriter Nunnally Johnson would later return to the field with The Three Faces of Eve (1957). All are fine films.