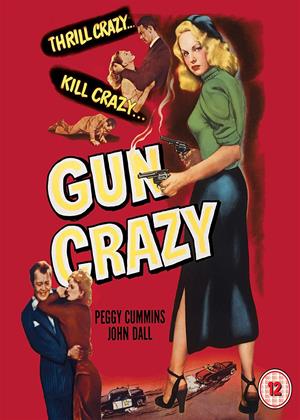 Legendary poverty row cult film based on the Bonnie and Clyde story and made by brilliant B director Lewis who shot many low budget films in the noir style. John Dall and Peggy Cummins are dynamite together as two outlaws compelled in different ways by their fatal obsession with guns.

Anne Laurie Starr is a poor girl without compassion or values who is driven by adrenaline which is either released through violent crime or sex. Bart Tate is a working class kid who finds status through shooting. Obliged by his desire for her, he is drawn into crime, holding up stores, and then banks leading eventually to murder.

Dall and Cummings are superb. Sexy and cheap. Apart from the difference that he can't kill, and she has to kill, they are made for each other. Cummings is a revelation. It feels a lucky miracle she got this role. Starr is so happy when she is stealing, so fulfilled when she is killing, it's a bit infectious.

The film is contemporary, but set in a timeless rural west it has the feel of a depression era gangster film, all getaway cars and shoot outs. There's a sassy script from blacklisted Dalton Trumbo (under another writer's name).The direction is ostentatiously stylish, most famously the bank heist which was shot in one cut from the back of their car, placing the audience literally in the back seat. The depiction of these small, poor country towns is palpable, and the wild, desolate location shooting conveys a powerful ambience of encroaching despair.