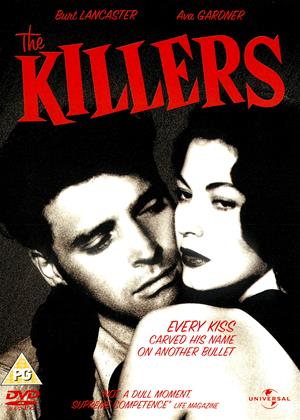 Reviews (3) of The Killers

Long shadows of the past. - The Killers review by RhysH

From the opening sonorous chord of the Miklos Rozsa score you know you are in for a film noir treat. Then under the street lights stalk the eponymous killers casting long shadows like extras from Ivan The Terrible. The opening, threatening dialogue in the diner compounds the feeling.

The plot delivered with a series of flashbacks from different points of view reveals double-cross on double-cross.

Burt Lancaster as "The Swede" a boxed out boxer broods all over the film and Ava Gardner as Kitty Collins (such an innocent name) lays down the rules for the femme fatale and looks gorgeous while she does it. When Gardner and Lancaster have their only kiss you can sense the Judas taste.

When one of the villains lies dying on the plush carpeted stairs he asks for a cigarette, he gets one, and the detective gives him a light by striking the match on the sole of his shoe. Now that's style.

I didn't realise it at the time but this was Burt Lancaster's first senior acting role and you can see , even in this early outing his potential. He oozes charisma and the sexual chemistry with Ava Gardner is potent. I didn't find the film itself particuarly engaging, it lacked the tension that you would hope to find in a movie of this genre but it is nevertheless a decent plot and moves along at a decent pace.

Greatly altered from Ernest Hemingway's short story about two hit-men who wonder why their victim doesn't care about dying (the 1964 remake was much more faithful to the source material), in this version, the title characters, after making a memorably nasty impression in the first few minutes, are almost completely absent from the film, and don't even notice that Burt Lancaster is oddly apathetic about being shot dead. By the way, if you remember seventies private eye Frank Cannon, whose trademark was being fat, you might enjoy seeing the actor who played him, William Conrad, as one of the murderers.

Lancaster of course steals the film, as he usually did, despite having surprisingly little screen-time. Although we nowadays remember him as a square-jawed hero, he was always better at playing characters who were somewhere between flawed and irredeemable (he would have made a fantastic Batman). Here he plays a basically good but rather dim-witted boxer drawn to the dark side through a combination of an injury that ends his boxing career and his overwhelming attraction to the irresistibly sultry Ava Gardner, which is definitely lust rather than love, an emotion Lancaster manages to project superbly, despite the Hayes Code meaning that he couldn't say or do very much about it on screen (this film is clearly having fun getting things past the censor - there's even a not-very-veiled reference to heroin addiction), and we truly understand that he's a nice guy who just kind of got swept away by events he wasn't smart enough to think through until it was too late.

Where it falls down is giving us a hero in the unfortunate form of Edmond O'Brien, the insurance investigator who solves the mystery simply because he's an obsessive-compulsive jobsworth with the charisma of a car-park. Whereas a true film noir masterpiece like "Rififi" shows us all the events from the point of view of the people directly involved in them, here we mostly see this dull and totally unsympathetic man interacting with people more interesting than him, and the things that really get our attention nearly all occur in flashbacks. This was probably a deliberate joke on the part of director/scriptwriter Robert Siodmak (who pretty much invented what we nowadays think is the ancient myth of the werewolf), since he goes out of his way to point out at the end that the hero's death-defying exploits have resulted in his insurance company's customers having their next year's premiums reduced by a tenth of one cent, but all the same, it badly undermines the film's appeal to make us spend so much time in the company of the least interesting person in the entire cast.

It's not a bad film. It's just nowhere near as good as it would have been if they'd omitted the central character entirely and let us spend much more time with everybody else.