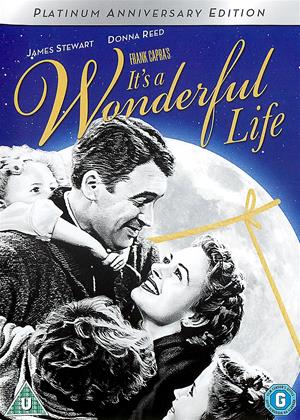 Reviews (2) of It's a Wonderful Life

The Christmas Classic - It's a Wonderful Life review by CP Customer

Corny but wonderful - a great performance by James Stewart.

My favourite film. - It's a Wonderful Life review by Steve Mason

Frank Capra's It's a Wonderful Life didn't make its costs back, and was released to a critical shrug. Strange that a film that is essentially about sacrifice should so underwhelm a world coming out of war. Maybe everyone wanted to have fun?

George Bailey (Jimmy Stewart) has reached the end of himself. He has sacrificed his life for others, he faces financial destruction and decides that suicide would be the best way out. After a bang on the head, and a couple of drinks, Bailey is confronted with the world as it would have been had he never lived...

So far, so whimsical. The film though manages to absorb its undoubted sentimentality in the utter desolation of its premise. The harrying of Bailey to that bridge in the dark of Pottersville, staring down with fear into the blackness of the river.

Hard to imagine that anyone but Capra could have carried it off. And that cast... It's a Wonderful Life is a wonder; an extraordinarily emotional experience, a sustainedly bleak encounter that finally offers up an overwhelming catharsis. It devastates us so completely, because we care so much.