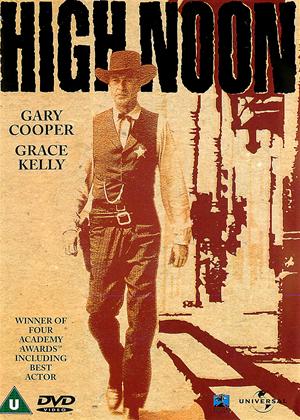 Do not forsake this classic western - High Noon review by PT

Law man wants to quit and leave his violent life behind for the love of his woman. Of course the baddies never let it go when you've done something to anger them and are on their way to gun cooper down.

His wife, a brilliant Grace Kelly wants him to forego his ego, pride and courage and head for the hills.

In the end Cooper can't run with his tail between his legs and decides to wait for the inivetable, kill or be killed, putting Grace on the stage alone.

Top class film with some brilliant scenes, like watching his wife leaving on the aforementioned stage, their faces saying everything. The watching of the clock approaching high noon and the arrival of the train with the real menacing bad guys (including a very young Lee Van Clef), not to mention the shoot out itself.

The set up of this film is simple and classic. Just over an hour before he is set to retire and leave town with his new bride, Marshal Will Kane receives news that Frank Miller, a violent criminal who he put behind bars, has been pardoned and is arriving on the noon train to meet his three accomplices and seek revenge on Kane. He is implored by his wife and many of the townsfolk (some with Kane's interests at heart, some with their own) to leave town, but with a new marshal not due to arrive until the next day, Kane is unable to turn his back on the town, fearing not only that Miller would pursue him if he fled but also that Miller would set about dragging the town back into the state it was in before he rid it of Miller and cleaned the place up.

For the next hour, Kane tries unsuccessfully to enlist a posse of deputies to help him face Miller. Some have a personal grievance against Kane; others were able to benefit financially from the criminal activities of Miller; others are simply too scared or jaded to fight. Abandoned by everyone (even, seemingly, his wife), Kane heads alone towards a fateful showdown with the four criminals.

I really wanted to like this film more than I did. I think my main gripe is that is somehow fails to exploit the potential of the classic set up. It's engaging and there are lots of good performances, but it's also rather episodic as it goes through the process of showing the moral failings of all of the people who abandon Kane in his (literal) hour of need. Kane's determination to stand for what is right, and the ease with which he is deserted by people who he has helped in the past, is quite compelling (and, inevitably, widely interpreted as a comment on McCarthysism, HUAC etc). Tension builds to an extent, but is never really ratcheted up to the nerve-jangling level that it could have been. And when Frank Miller finally arrives, he is an underwhelming, forgettable villain. The confrontation between Kane and Miller's gang is anticlimactic - Miller, supposedly a terrifying, hardened criminal is ultimately defeated after being lightly shoved in the face by Grace Kelly, allowing Kane to shoot him. I am a fan of Sergio Leone's westerns, in which climactic showdowns are stylised, operatic and protracted - so I'm being a bit unfair judging this film by those standards. I'm sure if you find Leone's westerns absurd and overblown then the brevity of this film's climax would be refreshing.