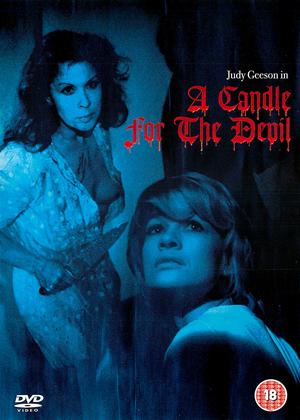 Synopsis:
Laura Barkley (Judy Geeson) travels to a sleepy Spanish town to visit her sister, who is staying at an inn run by two religious sisters. But when she arrives she discovers that her sister has mysteriously disappeared. The two sisters, Marta and Veronica, tell Laura that her sister left suddenly but no one has seen her leave the village. Laura decides to stay at the inn whilst searching for her sister but soon discovers that the self-righteous sisters cannot bear the nakedness and promiscuity of young English holidaymakers. One by one, these pleasure seekers begin to disappear. Meanwhile, the sisters evening meals begin to take on an unusual flavour...
Actors:
Judy Geeson, Aurora Bautista, Esperanza Roy, Víctor Alcázar, Lone Fleming, Blanca Estrada, Loreta Tovar, Montserrat Julió, Fernando Villena, Fernando Hilbeck, Charley Pineiro
Directors:
Eugenio Martín
Producers:
José López Moreno
Writers:
Eugenio Martín, Antonio Fos
Aka:
Una vela para el diablo
Studio:
Odeon
Genres:
Classics, Horror
Countries:
Spain, Classics, Horror

Rent other films like A Candle for the Devil

Reviews (1) of A Candle for the Devil

Spoilers follow ... - A Candle for the Devil review by NP

Uptight Marta (Aurora Bautista) is in a dilemma. Fresh faced Laura Barkley (Judy Geeson) has arrived to stay and only minutes earlier, Marta had caused the death of her sister. Marta’s own sister, the much less puritanical Veronica (Esperanza Roy) has been stealing money from the safe and carrying on with young general help Eduardo (Víctor Alcázar).

Despite being fairly central to the plot, Laura doesn’t feature as much as you might expect. Her new friend, obnoxious Helen (Lone Fleming) is the next one to be despatched. With people dropping like flies around her, Laura’s suspicions grow.

Initially, I sympathised with Marta’s thinking – the character of Helen for example wasn’t so much sexually provocative, but a thoroughly obnoxious character. Whilst her fate was abhorrent, she was advised several times to leave the hotel and was aggressively petulant in her defiance. As time goes on, however, Marta either becomes more twisted, or the depths of her instability becomes more and more pronounced to the viewer. This is demonstrated never more pleasingly when ‘the eye of a young woman’ is found staring out of someone’s hotel dinner. Although, considering the film’s title is ‘Candle for the Devil’, these events are a little small-time; I expected something a little more demonic.

The story ends on an uncertain note. Either the sisters’ deadly exploits are about to be exposed to the mad-eyed authorities, or the whole town is in on it. Revelling in the kind of intrigue that made ‘Psycho (1960)’ such a huge success, ‘A Candle for the Devil’ seems under-developed. It would have been more satisfying had it been made clearer if the entire district condoned, or was involved in the cover-up of, Marta’s blatantly murderous actions.