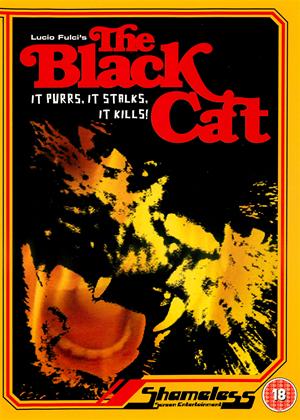 Reviews (1) of The Black Cat

I am not always a fan of the colourful, bright-red-blood-splashed world of director Lucio Fulci (or his fellow director of such films, Mario Bava) although it would be wrong of me to under-estimate how influential their projects have often been. Such extravagantly lit productions often rob the story of a sense of reality and, while they may be spectacular to look at, I can't always believe in them.

And so to 'The Black Cat'. Loosely based on the Edgar Allan Poe story, this production could be seen as an exercise in restraint - and it all comes together beautifully. Police Inspector Gorley is soberly played by David Warbeck as a kind of Roger Moore/Ian McCulloch hybrid. Mimsy Farmer is Jill Trevers, initially a bit too sensible for a horror run-around starring an aggressive feline. Both actors play things very much as real, which gives what could be an occasionally ludicrous story a sense of gravitas, leaving Patrick Magee to really go to town with the character of mad old Professor Robert Miles, who has a kind of connection with the titular mouser: the question is, who is pulling the strings?

I thoroughly enjoyed every aspect of this adaption. Fulci gives many scenes a looming, poetic quality without ever drifting into gaudy unreality. Various cats-eye views work well and the beautiful sleek feline(s) used here behave very well and genuinely have an unsettling edge (I say this as a cat lover). The enhanced sound of growling that accompanies the cat's every appearance also lets us know the creature is not to be messed with. All this, with various twists and turns and occasional shocking bouts of brief gore (with bright red blood of course), insures there is never an excuse to look away. Highly recommended, my score for this is 8 out of 10.