Rent The Curse of Frankenstein (1957) 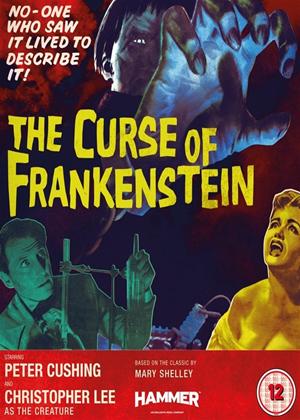 Reviews (2) of The Curse of Frankenstein

It's Alive! - The Curse of Frankenstein review by Count Otto Black

This was the movie that introduced unsuspecting audiences to the Hammer style which would have such a huge impact on horror cinema for the next two decades. And it was a bold move to reinvent one of the old Universal monsters, because the poor things had long since become feeble parodies of themselves, even co-starring in Abbott & Costello films. So it came as a genuine shock when Baron Frankenstein and his creation got up to genuinely horrid things involving lashings of bright red blood and real guts from the butcher's shop.

It's a historically important movie, and in its way a classic. But does it still stand up as great horror sixty years on? The answer has to be yes and no. People were far more easily horrified in those days, and by today's standards the gore is very tame and there's not a lot of it. The miserly budget is also painfully obvious. Hammer were taking a gamble, and they didn't want to spend too much on a film which might very well bomb, so apart from a few scenes in a wood by a lake which might be almost anywhere (but is in fact round the back of Bray Studios, and would become a familiar sight to cinema audiences over the years), the action is confined to studio sets, many of them rather small. Remember the magnificent laboratory Victor Frankenstein had in 1931? It appears that since then, his mad science budget has been drastically reduced.

The creature's appearance is also a poor substitute for the look made famous by Boris Karloff. That wasn't entirely Hammer's fault, since Universal still held the copyright to Jack Pierce's iconic makeup, but it could still have been done a lot better. Lee himself hated the film and his rôle in it, feeling it was beneath his dignity as an actor to play a character with no lines and his face completely obscured by lumpy latex, and he was only cast because he was 6'5". However, he does bring what he can to the performance, and the way the creature moves like a poorly manipulated marionette as if its mismatched parts are having trouble cooperating with each other is genuinely creepy, and by far the most memorable thing about this decidedly bargain-basement monster.

What still works splendidly about the film is Peter Cushing's superb performance as Victor Frankenstein. Hammer decided from the outset that, since they were going for horror rather than pathos, the real monster was the Baron himself, not the miserable creatures he gave a warped semblance of life they never wanted. Cushing plays him as a charming psychopath who cares about absolutely nothing except his obsession with proving the truth of his theories, and if a few people end up dead, they deserved it for becoming inconvenient. His passionate commitment to what he whitewashes as scientific progress but is really his own ego, a far more monstrous beast than anything he could ever stitch together from morgue leftovers, makes him one of the great screen villains. Of course, he acts his conspicuously small supporting cast off the screen, though to be fair, Christopher Lee is reduced to miming with a bag on his head so he can't really compete.

It's far and away Peter Cushing's film, and he's the reason to watch it. It's just as well Hammer kept their options open by ending the movie with Victor Frankenstein apparently doomed but didn't actually show him die. This modestly-priced feature was a big enough hit to justify Cushing reprising the rôle in five sequels, the last made in 1974.

Mild Spoilers ... - The Curse of Frankenstein review by NP

“It’s alive!” So gasps Peter Cushing as Baron Frankenstein, as he infuses the spark of life into a creature previously dead. On this occasion, it is a puppy used as an experiment. Cushing, taking over from Melvyn Hayes (as the younger Baron), makes the part instantly his own. Every flicker of the eye, every movement, every sideward glance is meticulously measured – a trait of Cushing’s acting, and one of the reasons he has been admired over the years by fans and fellow cast and crew members. As ‘Curse of Frankenstein’ starts, its credits intoned over swirling red smoke, Frankenstein is dishevelled and desperate, imprisoned for his foul deeds and a cert for the guillotine – his story is told in flashback.

This was Hammer’s first major success, the Mary Shelley novel condensed by writer Jimmy Sangster (but not as much as Dracula was the following year). Robert Urquhart, who played Paul Krempe, Frankenstein’s tutor, walked out of the premiere, and in disgust gave an interview slating its horrific nature; needless to say, he never appeared in another cinematic film for Hammer. He was not alone – ‘revolting, degrading, pathetic and depressing’ are four words amongst many scathing reviews of ‘Curse of Frankenstein’ upon its release, usually from the prissy pens of the British critics. Happily, the film made seventy times the money that was needed to make it, which tells its own story.

Goat’s eyes, severed hands and heads, and Cushing’s blood spattered lapels certainly brought ‘Curse’ a huge level of notoriety upon its release which fuelled its popularity and put Hammer forever on the map – as well as making stars out of both Cushing, and his ‘creature’ Christopher Lee (a role for which Bernard Bresslaw was also considered). Lee was chosen mainly for his height and smothered in car-crash make-up and an obvious wig, which provides an effective scare but is hardly memorable in the way that Jack Pierce’s make-up had been for the Universal original. It is unfair to compare the two films however – they were made in a different age for a different audience - and that is the last time I shall do so.

The few wisps of humour in this doom-laden story are provided by The Baron’s affair with maid Justine, who naively believes his lies and tried to blackmail him, and another scene which involves The Baron politely asking for the marmalade during a genteel breakfast directly after the scene in which he locks Justine into his filthy laboratory with his reborn creature.

The Creature has a magnificent introduction. Left in an emptying water tank, with its chest heaving, there is a crash which leads Frankenstein to scurry into his deserted laboratory. There stands his creation, uncoordinated arms and hands reaching to rip away the bandages covering his face. Phil Leakey’s make-up is revealed, and the creature (or rather the late Professor Bernstein, whose brain is in the monster’s head) immediately recognises the man who originally killed him and reaches out to strangle him. No mild-mannered monster, he still invites a kind of sympathy – in the way a rabid dog would invite sympathy for its plight, if not for its temperament.

At the finale, we return to The Baron’s incarceration, with Frankenstein facing the guillotine after his last hope, Paul Krempe, has wilfully failed to save him. Krempe is hardly as virtuous as he seems, I think. For all his gallant protection of Frankenstein’s intended Elizabeth (Hazel Court), it is clear he has designs on her – by the film’s end, he happily places an arm around her as he escorts her out of Frankenstein’s cell. The cad.