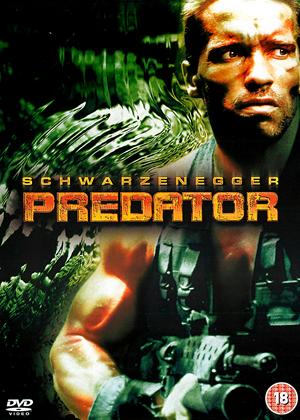 Sign up
The Lord of the Rings: The Return of the King: Extended Cut

Arnie has made over 40 films - most of them complete tripe. There are however four that I really like, namely 'The Terminator', 'Total Recall', 'The Running Man' - and 'Predator'. All are pretty simplistic but of a style I call 'crash-bang-wallop': lots of action so that you don't have to think very much, just sit back, enjoy and be swept along.

'Predator' starts out as a jungle commando movie until it becomes clear that someone / something is stalking Arnie's party of hard men. In a bizarre twist, it turns out to be a trophy-hunting, seriously ugly alien - and Arnie is left to face him alone. We can all guess who comes out the winner, of course.

This is a minor sci-fi classic and still looks good for a film approaching 30 years old - great stuff. 4/5 stars.

This film is a class act, one of the very best sci-fi OR action films ive ever seen.

Everything about the film feels right, right from the opening scenes. Its superbly directed and the main cast, an unbound team of soldiers (the film avoids any cheese and as such Arnies squad never gets named) are brilliant. There is no shakey cam here, its all proper action by proper action actors.

Indeed, if this film was just them mooching around the jungle it would still of been an excellent film.

But they run into something they dont expect.

Unlike other films where its pretty obvious the generic cast of monster fodder soldiers are all going to die, and probably quite quickly and with a lot of wimpering, here it has you thinking its the monster who is in trouble. And again, unlike modern films this is well cast as an equal fight. Arnies team are the 'best' as is there oppenent. Its an epic fight.

Predator is one of those rare films that stick with you long after you’ve watched it for the first time. And this is not because of Arnold, McTiernan, or Silvestri, but rather because of the film’s unexplainable ethereal atmosphere, touch and feel that makes it an all-time classic and something to be savored for generations to come. And the inclusion of Arnold, McTiernan, and Silvestri – also somewhat helps.

The film follows an elite warrior squad that specializes in guerilla warfare, being sent on a mission to retrieve hostages from a remote, undisclosed location somewhere in a South American jungle. Soon however, the team (lead by none other than Dutch, in turn played by Arnold Schwarzenegger) realizes they were being sent over false pretenses and lied to, as something otherworldly narrowly closes on their tracks. Are they hunting something, or maybe they are the hunted? The truth is, the viewers have the same amount of information about the mission at-hand, which is exactly how a proper story should be told through the lenses (both figuratively and literally) of a medium such as tape.

Meanwhile, the released prisoner Anna (Elpidia Carrillo) confirms the suspicions of the boys that indeed, nothing is as it seems (or the jungle comes alive, whichever one you prefer).

Ultimately, Predator had every reason to fail: the first design of the ‘alien creature’ was laughable, unbelievable, and was also played by Jean-Claude Van Damme of all people! The best part: the filmmakers went with it for a good chunk of the filming, and only decided to replace it when McTiernan interfered and said it wasn’t going to work. Why is this important? Mainly because most of the reactions that you see in the original film are done with said creature in mind; this speaks volumes about the actors’ abilities to act dead serious in wake of a cheesy B-movie alien creature, or hopping future action star Van Damme in disguise. Thankfully, someone from production decided to pull the plug before any real damage to the believability of the film was done (mostly McTiernan). Which leads me to my second main point: cinematography and camera movement.

John McTiernan uses its cameras in the most efficient way, picturing a clear geography of the characters in relation to themselves, the squad in relation to the terrorist group, the squad in relation to the Predator, the Predator in relation to the squad, and Dutch in relation to everyone else both inside and outside the team, including Anna and the Predator as well. This is very important in movies and frankly, I’ve rarely seen a director craft such a unique sense of movement in an action film (the first half of Sicario comes to mind), without confusing or boring the viewer to death. Sadly, this geography is often overlooked and underappreciated, whilst also costing an arm and a leg to pull of properly. That’s why everyone nowadays throws in some handhelds, shaky cams, and confusing vantage points and calls it a day. It’s just faster, it gets the job done, and doesn’t require any special directorial talent to make. But, let’s end this review on a high note now, shall we?

Predator is a feast for the senses, and a food for thought for the mind. It’s a definitive must-watch for anyone brave enough to call themselves a movie buff as is. Predator: one of the last remnants of the true action hero trope and an inspiring figure for future kids, both boys and girls, to follow.