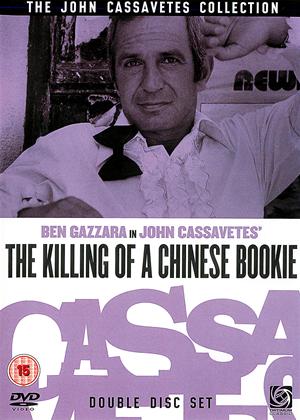 Rent other films like The Killing of a Chinese Bookie

Reviews (2) of The Killing of a Chinese Bookie

This is a visit to the dark side of the strip. For all purposes a decent nightclub owner, who treats his girls and friends well, falls into gambling debt. Setting up a form of repayment that threatens everything. This not only goes against his morals but assists crooks he has come to fear to loathe. Cassavetes has a unique way of directing with many shots seemingly leaving characters out of the shot. Only to pop up on another angle. This disjointed and almost haphazard approach gives Chinese Bookie a real edge. You warm to the main characters and feel immersed in their world. There is no slick seventies LA style here although everyone concerned believes they are living the good life. A great deal of the film is set indoors or takes place at night sets are sparse and dimly lit, you almost wonder what's in the shadows. The seventies are overlooked in cinema yet in the states many interesting films were being released albeit with limited budgets. This is a fine place to start your exploration.

This bizarre, unflinching, and occasionally self-indulgent movie has its faults, but it's still an extraordinarily honest depiction of what it's like to live according to the two sacred principles of American society, greed and hedonism, when you're pretty close to the bottom of the pile and clinging on with your fingernails to avoid falling off it altogether. Filmed in a curious style which nearly qualifies it as an extremely early found footage movie, it often looks as though the characters are being followed by a TV journalist who constantly thrusts the camera into their faces as if hoping they'll say something quotable, but since this particular paparazzo is apparently invisible, they never do. This attempt to make the movie seem less like a polished Hollywood product and more like real life is its biggest flaw, since at times it's badly overdone, and can be confusing in scenes where we're shown closeups of faces when we could do with seeing the whole room because something's happening off-camera.

Thematically it's just as atypical, being a completely non-judgemental portrait of an extremely imperfect man trying to earn a dubious living on the surface of a quagmire of money and lust, and getting sucked down by predators who make him look like Snow White. Ben Gazzara is perfectly cast as Cosmo Vittelli, the owner of a third-rate strip-joint hosting what has to be the worst cabaret ever captured on film, starring a living embodiment of irony called Mister Sophistication. Sleazy though Cosmo undoubtedly is, in a strange way we come to like him as we get to know him and the other lowlifes in his circle. These people genuinely care about each other, and although the Crazy Horse West may be a tacky dive with a terrible floor-show, they're doing the best they can, and they take pride in it because it may not be much, but at least it's something.

Martin Scorsese's ground-breaking "Mean Streets" was made three years before this film and was obviously a huge influence on it. The difference is that Scorsese's antiheroes are bullies who make their money by hurting people, whereas this movie is about the people they hurt. On one level it's gloomy and nihilistic, since Cosmo spends most of the film trapped in an increasingly awful situation, the nature of which won't come as a surprise because there's rather a big clue in the title. And yet it's oddly life-affirming too. Cosmo's downfall is indirectly caused by his indifference to money. It's useful stuff to have when he needs it, but in the end all he truly wants is to run a club where everyone has a good time. And however seedy and disreputable that club is, it's Paradise compared to the world inhabited by his tormentors, who value money more than life so long as the life isn't their own, but can't remember how to have fun or what friends are.

Technical note: this movie is advertised as being a two-disc set comprising the original cut and a shortened version. I only ordered disc 1, but I found it contained both cuts of the film. If disc 2 exists, I have no idea what's on it.