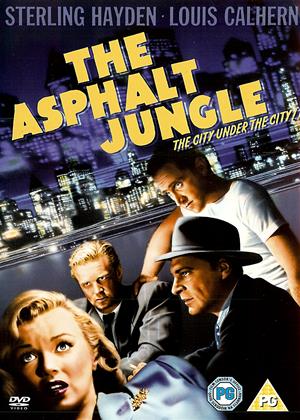 Reviews (2) of The Asphalt Jungle

take yourself back to the good old days. sat night popcorn cola and a great movie.lots of great action and with great actors and the gorgeous marily monroe. keeps you on the edge of your seat and as they say the old ones are the best ones.

The common ancestor of all heist films and still the best. It wrote the rules for this genre. Credit must go to WR Burnett from whose novel this was faithfully adapted. It invented the three act structure of the caper story: the development of a plan and assembly of a gang; a long middle section showing the logistics of the actual robbery; and a conclusion where it all falls apart due to the tragic flaws of both the plan and the protagonists.

Doc (Sam Jaffe) works up an idea for a jewel raid worth a million dollars and interviews for his team: a safecracker, a heavy (wonderful Sterling Hayden as Dix) and a getaway driver. He seeks out finance from Olonzo Emmerich (Louis Calhern) who agrees to also be the fence, even though he is financially ruined and plans to just steal the haul. Great to see a very young Marilyn Monroe as Emmerich's sleepy-eyed, gold digging moll.

The heist mimics a legitimate business. The plan is an asset, that Doc may just sell to a different gang. As Emmerich says, 'crime is just a left handed form of human endeavour'. At the heart of the film is Dix, the 'hooligan'. He is a dumb, monosyllabic stick up operator but the only member of the gang with values (though rugged), a sense of duty (though distorted) and any loyalty at all. His moll is Doll, (superb performance by Jean Hagen) who is the sort of bad luck dame who keeps crying her fake eyelashes down her cheeks in a river of mascara. I love their literal, unimaginative nicknames.

Dix dreams of being back on the farm in Kentucky, and he gets so near. As Doc says, 'we all work for our vice', and it's this that destroys each man. For Dix it is the horses. Doc is undone by his sexual fetish. It's a brilliant film from Huston, full of imaginative flourishes and convincing jargon. It is a work of realism, but its pessimistic fatalism is very film noir.