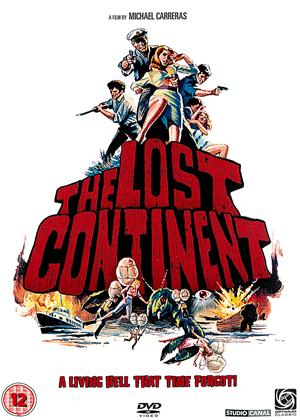 Reviews (1) of The Lost Continent

Nobody Expects The Spanish Inquisition! - The Lost Continent review by Count Otto Black

By the late sixties Hammer was starting to run out of steam, and in one of several increasingly ill-advised attempts to revitalise the brand, they came up with the idea of a Dennis Wheatley franchise. And why not? Although largely forgotten today, he was almost the Stephen King of his era. Alas, it didn't work, mainly because the reading public finally turned their backs on Wheatley's clunky potboilers, whose manly, squared-jawed, slightly fascist heroes were as out of date as Bulldog Drummond and Biggles, at precisely the same time as Hammer were trying to launch their Wheatley Cinematic Universe.

"The Devil Rides Out" did encouragingly well at the box office, but this second instalment in the Wheatleyverse was also the last. Based on one of his lesser-known novels, "Uncharted Seas" (the fellow in the screenshot above is reading the book without noticing he's in it, which is the best joke in a film that could really do with more humour), it's strangely similar to Roger Corman's legendary "Attack Of The Crab Monsters", especially during a scene in which the increasingly bewildered cast are literally attacked by a crab monster. But unlike Corman's film, or indeed "The Devil Rides Out", it makes the fatal blunder of not introducing its truly bizarre plot elements right at the start. In fact, half the film is over before we get our first glimpse of the weirdness we paid to see.

This is a serious mistake because it gives us far too much time to get to know characters we aren't going to have much sympathy for, even when they die horribly. One of them is so unsympathetic that his own daughter is absolutely delighted when he gets eaten by a shark. As for the designated hero, the captain of this lugger isn't fit to shovel... Well, you probably know how rest of the song goes. Did I say "designated hero"? He defeats the baddies so I suppose he must be, even though he's the kind of man who will shoot dead a member of his own crew for trying to escape from a ship which is almost certainly going to explode thanks to his own suicidally stupid decisions. Later, he makes a prisoner talk by repeatedly slamming his face against a table very hard indeed. What a guy!

But eventually this C, D, and Z-list cast, which includes several faces you'll associate more with comedies than horror films, a lady with really large breasts who once sang backing vocals for David Bowie, and my uncle's old mate Michael Ripper who back in the day was in just about everything, arrive at a mid-Atlantic "lost continent" which has presumably gone unnoticed for so long because it's about the size of Rockall, where they are given a hard time by vampire seaweed, various monsters which would have been considered sub-par on "Doctor Who" in the Jon Pertwee era (one of which is obviously on wheels), and the Spanish Inquisition. Yes, really.

If the whole film was like this it would be a blast! Unfortunately the long stretches where the story isn't as fantastical as it should be, and the incredibly unsympathetic characters, especially the "hero", make it a bit of drag. I'd give it 50% if this site's rating system allowed me to, but three stars is too many because by no stretch of the imagination is it a good film. Though it's a fairly entertaining bad one that could have been magnificently daft if it had been blessed with a director who fully appreciated the absurdity of the material. Sadly it wasn't, resulting in the kind of deservedly obscure flop those ageing kidults at MST3K use as fodder for their tired old schtick. I'm surprised they haven't done this one yet, but I expect they'll get round to it.