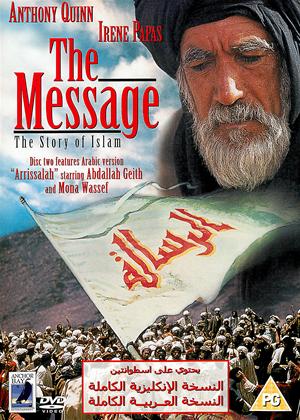 Reviews (1) of The Message

I remember the fuss when this film was shown in cinemas in the last 70s - the first time ever I heard of Islamic protests and demands. Little did I know what was coming down the line...

Anyway, it is a so-so but overlong epic - however, it whitewashes a lot, and reading books by Peter Townsend can fill in those gaps.

Many will be surprised at the promotion that Islam treats women as equals and does not force people into marriage or force them to convert to Islam - a light reading of history would debunk both.

The film makers were not brave enough to show Mohammad as a speaking character - instead the camera is him in a way reminiscent of the classic early 60s film PEEPING TOM, bizarrely.

If you like sword and sandals epics like Ben Hur of The Greatest Story Ever Told and those long 1950s films they used to play at Easter on the BBC (before it decided to ignore all Christian festivals but commemorate those of other faiths) then you'll like this.

It does show Islam as a warrior religion which fights - it also shows rightly that slavery was accepted by Muslims, and is, some would argue.

Interesting to watch. A bit of a curiosity piece really. Hamza played by Mexican-American actor Anthonio Quinn (Zorba the Greek; the Old Man of the Sea). These days no doubt casting would be what they now absurdly call 'ethnically appropriate' but Anthony Quinn and other acts do well. This is before CGI too and battle scenes are decent enough.