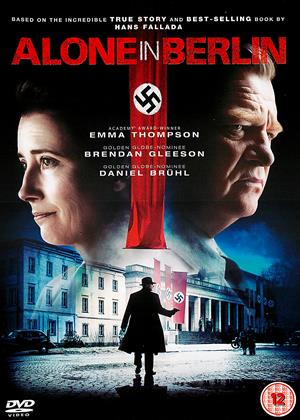 Reviews (6) of Alone in Berlin

Worth watching - Alone in Berlin review by WP

If you are looking for a joyful, dramatic cinematic experience this is definitely not it. However if your prepared to once again feel the brutality of Nazism, then I think this film has some really worthwhile aspects. It shows through the experience of an average married couple how easily an entire society can be dragged to the bottom when there are few who are prepared to take any kind of stand, but also just what even the most minor stand can cost once the descent has started. The whole feel of the film is low key, so when the brutality appears it is all the more shocking. It is probably more comparable to a good television play, but how many of those are there these days.

The cast is amazing, the story of the main characters is an interesting one, as is the story of how the original book came to be. But.... somehow the film just doesn't lift off it sort of shuffles it's way through the storyline until it stops. Basically if you want to watch a film loosely based on an historical event with a good portrayal ish of how it might feel to be a little person up against a massive terrifying evil whilst drinking a cup of tea then this is the film for you. If you want to be engaged, entertained and mesmerised then this is a film to avoid.

Unbearably poignant with the death of their son, and being stuck together in vicious, suspicious, cold Berlin. The interplay between the two main characters and the unfolding, eventual meeting of souls, suggests a flower growing unexpectedly between the cracks of a grey pavement. Bring in the third character, and it shows the relentless propaganda machine, that is fueled by hatred and anger, and the few who allow themselves to 'see' , and what happens to them. A true story, and worth the watch. Learn something from it, there is so much there......

I so enjoyed the book, which built the tension so well. Although the cast was very good, I just didn’t have the sympathy I felt for the two main characters in the book.

Not a film to cheer you up if you are feeling low!

I read the book and it was very involving and holds the reader until the very end.So I really wanted to see the film.It was so different than what I was expecting,lots of the book glossed over,no slow build up to talk of,It really was rather dull.Good quality actors but the director did not get much of a performance from Emma Thomson who sleep walks through the film not generating the tension so well portraid in the book.

I read the book and thought it one of the best I’ve ever read.

It’s a very detailed and long book and did wonder how it would be filmed as it would be hard to convey the story in detail without it being 8 hours long. I think they did a fine job on it.

If you are looking for action and fast pace then it’s not for you. It’s about the tension and turning grief into something positive.

Whilst eliminating some details from the book, I felt the performances were excellent and it showed the brutality and hopelessness people lived under the Nazis in Germany.

It is a slow film,but it has to be, it’s not a feel good piece, but the book isn’t either. It’s full of sadness and hopelessness, but this brings with it a future, which is the whole point of the book and movie.

Iwoukd watch it again as well as reading the book.