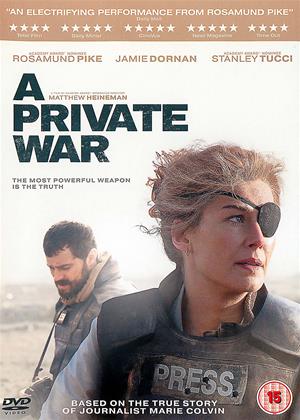 Synopsis:
In a world where journalism is under attack, Marie Colvin (Rosamund Pike) is one of the most celebrated war correspondents of our time. Colvin is an utterly fearless and rebellious spirit, driven to the front-lines of conflicts across the globe to give voice to the voiceless, while constantly testing the limits between bravery and bravado. After being hit by a grenade in Sri Lanka, she wears a distinctive eye patch and is still as comfortable sipping martinis with London's elite as she is confronting dictators. Colvin sacrifices loving relationships, and over time, her personal life starts to unravel as the trauma she's witnessed takes its toll.
Yet, her mission to show the true cost of war leads her - along with renowned war photographer Paul Conroy (Jamie Doman) - to embark on the most dangerous assignment of their lives in the besieged Syrian city of Horns.
Actors:
Rosamund Pike, Greg Wise, Alexandra Moen, Tom Hollander, Faye Marsay, Jesuthasan Antonythasan, Raman Srinivasan, Natasha Jayetileke, Nikki Amuka-Bird, Amanda Drew, Hilton McRae, Fady Elsayed, Tristan Tait, Corey Johnson, Jamie Dornan, Toma Shelmon, Nadeem Srouji, Mahmoud Al Farj, Rani Jalal, Thaer Manakhi
Directors:
Matthew Heineman
Producers:
Matthew George, Matthew Heineman, Basil Iwanyk, Marissa McMahon, Charlize Theron
Writers:
Marie Brenner, Arash Amel
Aka:
Marie Colvin
Studio:
Altitude
Genres:
Action & Adventure, Drama

Reviews (6) of A Private War

This film is excellent at what it does, which is to convey a sense of the person she was and what motivated her, the need to be witness.

It isn't an analysis of the conflicts she covered, but a good film nonetheless.

A very interesting film surrounding the life and work of Marie Colvin, the highly regarded international correspondent who specialised in war zones and who lost her life awakening the world to the horrors of the Syrian civil war and the debunk of the Governments claim they were bombing insurgents!

Tour de Force performance from Rosamund Pike as Marie, the demons she was fighting to keep the story being told at all cost even to herself, she lost an eye in a previous assignment.

a moving film that highlighted the risks that some reporters take to bring us the news and the emotional effect it can have to be surrounded by those suffering in war.

A welcome reminder of Assads terrorism of his country and a study of the cost of human suffering.

More films about real-life amazing women desperately needed. So much potential for powerful films - A Private War review by AC

Underrated, perhaps the content a tad too important? A true, true story. Rosamund Pike utterly convincing as insanely courageous war correspondent, Marie Colvin, urged on by her self-serving boss to risk her liife to tell the appalling truth about man-made war so often glorified in macho Hollywood tripe. And upon which the UK economy depends, subsidised by the British taxpayer, flogging arms to whichever despotic regime will pay the price, . And who suffers most?  surprise, surprise, women and children.

Great acting from her photographer sidekick too.

So many exceptional women's stories remain untold, why?

Very worthy but boring - A Private War review by rh

The acting is absolutely fine in this movie. It was just the story that dragged a lot. I ejected the disk after about half an hour. Although the subject is very low worthy that's all I can say in the film's favour.

First, the negatives: this is way too long, with so much lingering on moments of struggling with PTSD and personal relationships - it could have been made to fit into 90 minutes, I am sure, and lays on the emotions rather thick to garner sympathy. This could be because the director has only directed documentaries before.

Second, the positives: it's better than the movie THE NEGOTIATOR which starred Rosamund Pike too, at least, and tells a tragic tale well.

One wonders how fair and unbiased this is, however - I doubt the writer or backers blame anyone but Assad for the situation in Syria; however, it's well known that Homs was full of ISIS supporters. So it's strange, as it was on news reports in the UK, to have the West siding with ISIS Islamists who are also responsible for terror attacks in Britain, France, Germany etc.

It's all aimed squarely at a US audience - why there's some Brit-blaming from the main character in Sri Lanka. For the record, the British Empire did not create ethnic/religious/caste/tribal tensions in Ceylon or India or Asia - they were there anyway! The British in fact tried to lessen them via a man-made law which applied equally to all and tried to get rid of the caste system. but it lingers on.

Also worth mentioning that there are a great many war journalists, mostly male, many of whom get killed and injured yet don't get movies made about them. I suppose they all have to balance being bold and/or reckless with safety concerns too, and maybe the risks excite these types of people, even if they get attacked. Maybe, like a lot of risk-taking mountaineers, many of them suffer depression if not taking such risks. Rather them than me anyway.

I'm sure a lot more films can be made about Syria, Afghanistan, Iraq and other warzones. This is a useful addition to the genre. 3 stars.

When thinking of dangerous jobs, one that comes to my mind almost immediately is that of a warzone reporter. While being a soldier is just as dangerous, reporters don’t find themselves armed, unable to defend themselves as they shoot with cameras as opposed to rifles. Marie Colvin of The Sunday Times was one such figure, devoting her life to covering stories that are dangerous, both to her physical and mental health. She continued on with an eyepatch and a battered mind to keep telling what needed to be told, ultimately leading to her gritty demise. Her story was covered in the 2012 article "Marie Colvin’s Private War" in Vanity Fair by Marie Brenner but now she takes on a new life in a movie.

Rosamond Pike plays Marie with a great sense of weariness. We first follow her at dinner parties and chatting with other journalists, giving closed and humble smiles. For witnessing the worst aspects of humanity in war, she holds her own well. Of course, this stability cannot last. She will later find herself caught in a crossfire and end up with an eyepatch. Marie returns home a little more frazzled but hides that terror behind booze and putting on a better face. But even she can see that face of not being a mess is melting. Dreams of dead children and combat still haunt her, making her a little bit more unstable with each vision.

Pike’s performance is rather stunning considering she doesn’t just passively go through the typical anguish of a reporter or get lost in the shuffling of war. Many sequences are reserved for her to be alone with her thoughts and observe her body, taking in how much has happened to her. Damage is present and she ignores it to keep going. During a conversation with a fellow journalist, she pulls out a decayed tooth and merely laughs it off. Marie continues to laugh and later continues to snap photos and listen to the stories of those affected by war, mothers giving tearful stories of their dead children. She’s aware that if she stops, her thoughts will crop up and throw her into a terrifying nightmare of the futility of her life and life in general. It’s one of many reasons why she jokingly denies going from covering wars to writing for the garden section of the paper.

The film does seem to spin a few drama wheels a little longer but to mostly great effect. Stanley Tucci plays a successful man who gets intimate with Marie but there’s only so far she can go with that relationship, not the least of which is her previous relationship problems. Her boss, Sean Ryan (Tom Hollander), bitterly disagrees with her choice in pursuing dangerous stories but as the wars go on it’s less about her disobedience and more out of concern for her well-being. He knows that all of these investigations are getting to her, making her PSTD far worse. After all, she was in Libya to cover the uprising. One day she was invited to interview a mostly accepting Muammar Al Gathafi. The next she’s snapping photos of his corpse while the populace celebrates his death.

A Private War thankfully doesn’t get too lost in the muck of the era for staging a wealth of events and war, allowing Pike to take charge of the picture as Marie. And she’s by far the highlight in a role she throws herself into with every inch of her soul, from her displays of a mental breakdown to observing her battered body naked in the mirror. She gives Marie the sort of gritty and emotional take that makes for a great bio-pic, even if it lays on the PTSD thick with its many flashbacks and dream sequences.