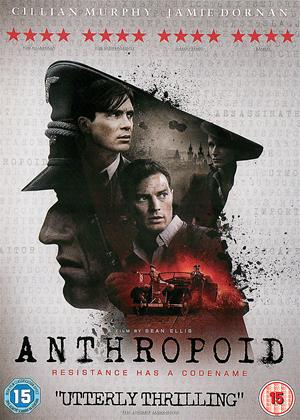 This is no doubt a good film - but not a great one. It cost £9 million to make, apparently, a great deal more than the 1975 film Operation Daybreak which is, frankly, better and which offers more emotional connection.

I lived for a year in Prague so know the places featured in this movie well - I have visited the church where the story ends, and saw the bullet holes and memorial.

Maybe that's why certain things annoyed me in this movie: 1) the use of Americanisms such as 'lay low' (which should be 'lie low'); 2) the lack of acknowledgement that this happened in 1942 a matter of weeks and months after the USA came into the war (in 1938/39/40/most of 1941 many US politicians and people supported Hitler) Britain stood alone from September 1939 untl December 1941 when the USA joined in WWII and 1941 when the Soviet Union's pact with Nazi Germany ended when Hitler invaded the USSR; 3) criticism of Britain entering the Munich agreement in 1938 when Britain was practically unarmed and standing alone so could not have done anything else.4) Germany did NOT invade all of Czechoslovakia in 1938 - just the north part the Sudetenland where most people were German speakers (many of whom were consequently killed by Czechs at the war's end) - it was not until 1939 that the Germans moved into the whole country and created the protectorate of Bohemia and Moravia. 5) no mention is made in this movie that Heydrich DID die a week after the attack from blood poisoning shock or, some say, because of chemicals in the grenade (botulism).

Now, of course, most people won't care about these facts all that much, but it's a shame the film gets them wrong or misleads.

Having said that, the story is well-acted and there is such attention to detail in the sets, the CGI shots of Prague in 1942 and the uniforms. However, it's all a bit cold - which can be an issue with CGI-created history.

One wonders what the movie version of the novel HHhH out later this year will be like as it portrays the exact same event.

I have seen the first film 'Daybreak' many years ago which left a long-lasting impression on me so much so that I made time to visit the church when I was in Prague last year. This newer film is very grey and grim and leaves one feeling that the mission was ultimately purposeless as retribution taken by the Germans was ruthlessly manic and insane. We are excluded from what is going on on the other side whereas in the older film Heydrich was introduced as a character and all German speech is unsubtitled. I also remember in the older film one or two aborted attempts at assassination before the actual. It's a tense build-up to the ultimate bloodbath and perhaps there could have been more information on what ensued to add to a more cathartic experience.

The church involved, Greek Orthodox, has information displays as to the final fatal events and the crypt is now a shrine displaying busts and attributions to the Czech partisans involved. Bullet ho;es and bloodstains remain. The opening to the crypt is a section of Spitfire wing and glides open at the gentlest touch. The anteroom has a very comprehensive display of information and in the silence one's blood boils reading that this evil man was given a martyr's funeral that Czech citizens were impelled to observe. "You are the two most bravest men I have ever known", says one of the resistance organisers to the two assassins but the film does not report that the Greek Orthodox priest offered himself to the German SS as sole responsibility for the affair. He endured months of torture before execution and was later canonised as a local saint.

Which film to watch? Watch both and visit Prague.

Really good story and well told of what actually happend , which is always hard to do in a film. The fight against the Germans taking over Prague . Very brave and courageous men and women. Really good true story

Seems longer than the actual war - Anthropoid review by AS

Acting, writing and direction utterly flat for a true story that deserved much better. Looks like made-for-daytime-TV with English actors playing Czechs speaking English with Czech accents and behaving like petulant public school boys. Aside from the semi-botched assassination attempt on Heydrich very little happens during the first 80 minutes. The final 20 minutes are taken up by a gunfight. A far superior realisation of this slice of WW2 history is 'Operation Daybreak' (1975).

What with Isis on the news in Syria, and yet more war movies being made, one get a bit fed up with more guns and violence. Not entertaining, but maybe is a documentation of events? Alas no. Check another write up, with specific details of the many flaws in the actual facts and figures depicted in the film.

One would hope that 9mill would pay for a decent research. Perhaps they just chose to ignore it? American backers maybe preferred their take on events?

Believe first and second World war films have to be something much smarter now, such as Imitation Game..............

Alas some things now happening in Africa and Syria are still very similar to 60 years back........films being made already.........

Nothing special - Anthropoid review by RW

Much, much better than the dire and pointless Son of Saul which is the last WWII film I watched, but still not a great film. The love interests seemed very stilted and completely lacking in chemistry, the story sauntered along, rather than racing, but at the assassination itself does seem to be what actually happened.

Watchable, but not memorable.

How to ruin a good story - Anthropoid review by Alphaville

In the wake of several good films on the assassination of Reinhard Heydrich, Hitler’s ‘Butcher of Prague’, Anthropoid ruins a terrific story so thoroughly it makes you angry at the waste. The film gets off to a bad start with confusing, handheld, too-close-in shots of a parachute landing. It has the aesthetic of a poorly-made home movie. It settles down for a while after that but every time the action hots up the images go haywire again. Perhaps director Sean Ellis couldn’t afford a Steadicam.

The budget is certainly underpowered. We hardly ever see Heydrich, or indeed any German until the last half hour. The overriding vibe is a theatrical tell-don’t-show. Most of the film takes place in closed rooms with action relayed by characters entering stage right or left. Ellis manages the seemingly impossible task of draining all drama out of the story, reducing it to scene after scene of indoor planning.

The on-the-nose dialogue is banal throughout, leaving the viewer to seek interest in watching a selection of British and Irish actors struggle with thick Czech accents. At least, one presumes they are meant to be Czech.

You might be sorely tempted to skip the plodding first hour before the assassination attempt, but be warned that this only lasts a couple of minutes anyway. And don’t get me started on the ending – a long shoot-out that’s an amateurish handheld visual mess. Has Ellis never seen The Wild Bunch?

The film’s only success is the rumbling score, which does its best to add much-needed tension. Otherwise this is a terrible disappointment. It sent me scuttling back to the superior 1976 version Operation Daybreak.

Gritty, uneasy and tense – Anthropoid is a Hollywood retelling of how a mission to kill Reinhard Heydrich developed, prepared and finally: was executed, but didn’t turn out the same way said conspirators wanted to unravel. And these were Czech and Slovak people whose comrades and compatriots were suffering deeply under Nazi occupation, and who finally took matters in their own hands. As a film, Anthropoid is perfectly paced and as we see each culmination unsnarling before our very eyes – we come to know why these people did what they did, their motivations behind the operation and their iron will to never give up – even in the face of death itself.

According to history books, Reinhard Heydrich was a pretty disliked bloke who was one of the main architects of the infamous Final Solution to the Jewish question, as Germany at the time had referred to what’s now widely known as The Holocaust. He was also in charge of Czechoslovakia, whose residents saw a great amount of suffering while being under his reign.

Needless to say, some people were not pleased with how things turned out for their beloved country.

So, they took upon themselves to free it. Jan Kubis (played by Jamie Dornan), Josef Gabcík (Cillian Murphy) and others, acting on behalf Czechoslovakia’s government in exile, conducted a plan to eliminate Heydrich and put an end to his terror that was long overdue.

However, therein lays this film’s dilemma: if you knew so many people would suffer dire consequences after a campaign like this one – would you still, in a clear conscience, proceed with it?

The plot follows two freedom fighters, Czech Jan and Slovak Jozef who jump aboard enemy territory after their initial training in England is over. Their mission is to locate what’s left of the underground resistance and announce their plan to assassinate the High German official as soon as possible. Upon hearing the conspiracy, other resistance members voiced their concerns and worried that, even in the event of success, there would possibly be grand retaliation upon everyone involved, their closest families and all others who share same beliefs as the Czechoslovakian government-in-exile.

After everything said and done, mission Anthropoid will forever engrave its mark onto history books – overshadowed by events even larger in scale than the assassination of Reinhard Heydrich during WWII.

As structure, Anthropoid closely resembles noir films, where careful pacing and deliberate lightning are key pillars around which everything else gravitates. Director Sean Ellis has managed to make the best cinematic depiction of this historic event that, needless to say – doesn’t end with people throwing flowers on a street and saluting victory with their hats in the air.

A very special tribute to those who fell defending ideals of the highest order.