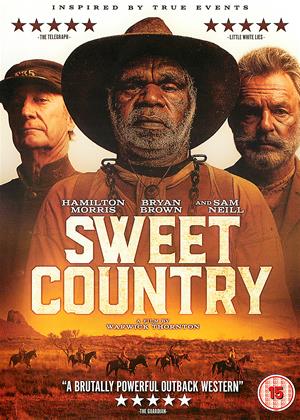 Powerful film set in the Australian outback in 1929. It is one of a number of recent Australian movies that are keeping alive the Western genre. Here the racism is directed at the aborigine people rather than native Americans.

The setting is very realistic, dusty, grimy and hard-scrabble living all around.

Most notable of all is the brilliant use of the harsh but beautiful landscapes.

My only quibble is with the use of quick insertions of scenes depicting both past and future events. It's a great story, just tell it straight!

An authentic and gripping story set in the Australian Outback, in 1929 - Sweet Country review by Philip in Paradiso

The plot is relatively simple: an Aboriginal farmhand, Sam Kelly, gets into trouble when his path crosses that of a violent, heavy-drinking and racist white farmer called Harry March. And the story unfolds relentlessly. The film is excellent on many levels. Within the genre - the Australian-type western - it is perfect, even though it is slow at times, more particularly at the beginning.

The film is very good because it feels so real and so authentic, as many Australian movies of this kind can be. There is something raw about the story: the film succeeds in conveying the vastness of Australia and its hinterland, and the rough way of life of its inhabitants - be they the Aborigines or the white settlers. The characters have a powerful on-screen presence, particularly and unusually the Aboriginal actors. Far from being secondary and silent figures, they are central to the story. Sam Kelly is full of dignity and strength, coping with fate as best he can. He is profoundly human and touching, and we can easily relate to him. The storyline is plausible from start to finish and the landscapes are intense and beautiful. The wild and remote beauty of the Outback is ever-present.

This is not an easy film to watch, on the other hand, as the story is not a rosy one. Many of the characters are quite repellent. But it is a memorable movie and a very good one. I recommend it.

All but the lead character are difficult to like, Lots of bullying, intimidation, brutality and of course, the main theme of the film, the deep rooted racism against aboriginies.

The film draws a picture of that era in Australian history, draws a grity picture of life with very few people enjoying any happiness.

Grity, little to please other than the scope of the Australian outback.

There’s a quiet, violent, and contemplative nature to Sweet Country that makes this Western a flavor all its own. Set in the Australian outback just after World War 1, the film follows a farm hand, preacher, and war veteran on the dusty Northern Plains. There’s drama, violence, and plenty of bitterness going around from the isolation, despair, and racism of the region. What transpires is a Western that manages to be just as gritty and treacherous as any American Western. Perhaps more so.

The farmhand is Sam Kelly (Hamilton Morris), an Australian Aboriginal who is more or less based on the true story of Wilaberta Jack. He’s employed by the preacher Fred Smith (Sam Neill), a kind man who values Sam’s work. But Fred decides to loan Sam out to the veteran Harry March (Ewen Leslie) who is nowhere near as pleasant. He’s drunk, bitter, and easily prone to beating on his employees with his short fuse. Sam’s family becomes an easy target; while he tends to the cattle, Harry will beat his son and rape his wife. Every man has his boiling point and Sam is no different, leading to him killing Harry when an act of self-defense presents itself. A manhunt and trial soon follow.

Director Warwick Thornton takes some interesting routes in weaving this story. He keeps a certain non-linear edge to seemingly quiet moments, where conversations are broken up with muted shots of aggressions in the past. It’s an interesting mix of blunt and subtle subtext, taking a peak at the real heat bubbling under the surface of every moment. This unique aspect carries a great sense of dread and danger that by the time the violence breaks out, it’s gripping.

This kind of grit is absolutely needed for a story such as this which could have too easily slipped down the familiar slope of melodrama in handling the racial and colonial aspects of European settlers and Indigenous Australians. There could have been some drawing out of the pain and persecution of the era, where somber violins accompany the scenes of man’s worst aspects. Not so with Sweet Country; the plains are kept relatively quiet with only the sounds of nature, shouting, and gunfire to set the mood of a troubled land.

I’ve learned since looking up this film that Sweet Country is considered a meat pie Western for being set in the Australian outback. This type of film has created an appetizing taste of a genre I seriously dig if there are more to come. The Outback setting looks absolutely gorgeous with its vast landscapes and gorgeous cinematography. The staging is brilliantly tense and brooding with an atmosphere that seems more akin to neo-Westerns with a slightly more intriguing twist of the region. And, yes, it holds an unrelenenting nature to its boldness that only the best of Westerns can showcase. It’s an emotionally driving picture that brings up the bitterness of history and stages it in a manner that lets the mind take in the cruelty rather than have it spelled out plainly. It’s just about everything an engaging Western should be.