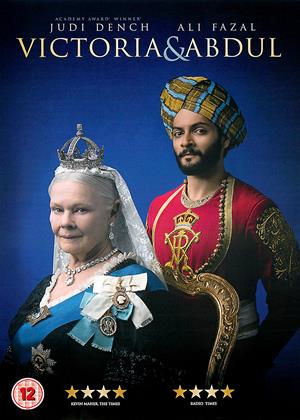 Reviews (15) of Victoria and Abdul

Not quite up to Mrs Brown. Probably stretching a story-loosely-based into a politically correct dig at the redneck Victorian norm of the era.

Someone has said that it is loosely based. I always have a look after seeing a 'true story' at the facts vs the movie and this one kept amazingly close to the truth.

If you liked Mrs Brown then you'll love this. I thought it was well acting and underplayed which made a real change and made the characters so much more believable.

This is a very recent find in the history of British monarchs so I found it fascinating.

This is a silly and superficial film rescued by the magnetic screen presence and extraordinary range of Judi Dench as Victoria.

Costume drama fatigue - Victoria and Abdul review by HE

I found this drama sad and disappointing. You sort of knew there would be the inevitable culture clash between the Victorian court and the Indian servants & that Victoria and Abdul would hit it off & that it would all end badly. Not to say that the acting wasn't good, it was, and that the costumes and the location & occasional humour weren't appreciated, they were, but I just didn't see it was a piece of history worth making into film drama.

I found this film extremely interesting and well acted as we have come to expect of Judi Dench. Abdul's lack of experience in Royal protocol was very well shown and very amusing at times. It was interesting to see once again the interiors of Osborne which I had filmed myself for a documentary about Victoria a couple of years ago. An excellent film and just the right length to tell the story.

Charming, if, at times, embarrassing to be British - Victoria and Abdul review by JK

I came to this with a 'Dame-Judi-plays-Victoria-again' frame of mind, assuming it to be another John Brown with different costumes. This film, however, really flags up the utter pomposity of the British attitude toward anyone or anything other than their own narrow minded bigotry.

Royal courts must have been the deadliest dull places to be so with nothing else to focus on but invented 'rituals' and pageantry their tiny minds had plenty of time to dream up racist and class-ridden propaganda. The sheer tedium of being a maid helping the queen to dress - all 20 of them - illustrates the 'watching paint dry' example.

Victoria herself appeared to rise above all this but was a sad, lonely figure - eating her way to crumbs of happiness. That JB and Abdul both gave her an opportunity to stretch her (not inconsiderable) mind and act like a human being was touching to watch.

The supporting cast, especially Eddie Izzard as Bertie, are superb.

I didn’t know anything about Abdul, or his relationship with Queen Victoria, so this story was completely new to me. What a wonderful story it is, too! The time just flew by...impeccably acted by all, especially the inexperienced actor playing Abdul. Dame Judi was her normal spellbinding self as a monarch who appeared very human and committed.

I think this film is superb, and would definitely watch it again without hesitation.

This film was so awful I couldn't watch till the end.

Allegedly based on a 'true story' (AKA totally made up to tick on trend diversity boxes), this is about as realistic as Star Trek. THIS DID NOT HAPPEN. Yet all those watching this travesty will think it all did and is pure fact.

Most viewers of this pc tripe will not know that the British empire was the most benevolent in history, banned slavery and spread that ban around the world, outlawed backwards traditions in Indian such as widows throwing themselves on the funeral pyre of their husbands to burn to death, and managed a vast country - India, which the British in effect created (AND imported foodstuffs not native to India such as tea and chillies) - created a democracy, based on rule of man-made law and organisation. Compare and contrast with the brutal rule of the Mogul Muslim dictators the British replaced, or the ethnic/religious violence that erupted when the British left. There were NEVER more than 50,000 soldiers and 250,000 administrators in the British Raj to manage a country of 300 million people, so no-one can make a serious case that the British were unwelcome - people are not stupid: they know who the superpower is at any time! Thank goodness it was the British at the time and not the Nazi Germans or Japanese or Chinese, as it is now, sadly.

I refuse to watch such nonsense and trash. I'd much rather watch It AIN'T HALF HOT, MUM, to be honest yet that isn't pc enough - though the jokes is always on the white British soldiers and never the native Indians.

Anything Judi is in, I respect. This was cringeworthy. Not her, but the whole take on the Empire. If there was a political point to make, the film failed. Yes I cried at the end, but...... what was the point?

Very disappointing, unless you are Empire stalwarts - in which case you will love it. Sad people.

Dull - Victoria and Abdul review by AM

Well acted film but tedious in the extreme. Can't really see the point of it being made, much preferred Mrs Brown

A real hidden story but fascinating and in many ways so relent to now days. All acting on top form, Judi Dench and Eddie Izzard just great.

There’s something so irresistibly charming about the performances of Judi Dench and Ali Fazal that I could just narrowly overlook the international politics that are mostly cast aside for character chemistry. We don’t focus so much on the questionable tactics of Queen Victoria (Dench) or the lies of Abdul Karim (Fazal) to tell a more sweet story that shoves the darker aspects to the background. But I’ll be damned if the two of them aren’t so cute that I wanted to saver all the sugariness of the couple.

As a sweet period piece, the film shines with personality. Dench plays the Queen as an aged, tired, and disinterested royalty, so bored by the decadent royal lunches she falls asleep before dessert. But in comes Abdul as a man of great talents in India but is looked down upon by the royal staff for the honor of bestowing a guest to her majesty. He wants to show his appreciation deeply and, against the better judgment from he scrutinizing staff, kisses her foot as a sign of respect. While the rest of the royalty panic, the Queen has a newfound interest in such a man willing to showcase a new form of affection.

The jolt goes further when the Queen requests to meet with Abdul alone and they hit it off big time. She finds Abdul to be a wealth of knowledge she finds tantalizing, from learning new languages to trying new food. The charming nature of both characters during their intimate scenes are so damn adorable I found it hard to erase the smile from my face every time they share a scene. And the film gives them plenty of moments for them to shine together, be it writing lessons, picnics, or casual strolls among the grounds.

Of course, this love can’t last not just because of the real world of conflicting politics and racial tensions but because we’d probably get a cavity of there was no tension. The royal staff thinks the Queen mad for letting a man with a turban be so close to the Queen, teaching her all sorts of new things they don’t feel properly reflects England. They seek any excuse to excuse Abdul from the Queen’s side and will go to extreme lengths to push him back, going so far as to giving physicals and informing the Queen of scandals surrounding her favorite Indian. Some of it is slander but some of it is the truth, placing Victoria in a very compromising position.

As you may have guessed from the setup of such a scenario, the darker aspects tend to fade for the relationship at hand. New of wars, rebellions, and genocides are almost uncomfortably swept under the rug so we can enjoy the scene of Queen Victoria demanding to try a mango for the first time. Don’t get me wrong; it’s a cute bit with a silly payoff but you really have to distance yourself from the rest of the international stage to enjoy it. In this aspect, the film makes the smart call for trying to be more of a character comedy than an all-encompassing period drama. Can you imagine if the smile-worthy scenes of Abdul going on walks with Victoria was punctuated or juxtaposed by bloody international conflict? Such scenes would carry an even more uneasy bitterness.

Victoria and Abdul does pretty much what one would expect it to do, weaving charm and comedy to the meeting of these two minds and little else. For keeping its head in its lane, I found the film a joy for what it set out to be. But take heed not to poke your head too far out of England to peer at the world abroad of this era. It’s safer inside where Victoria can sing wildly and Abdul can be offended by gelatin.