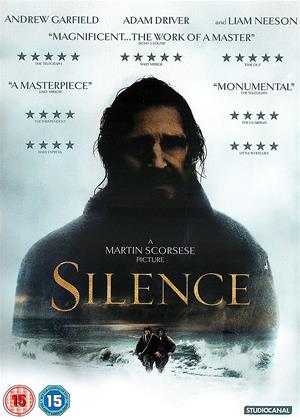 I enjoyed this movie for the simple reason that I knew NOTHING of this period of history in Japan, other than the Dutch (richest trading nation on earth in 17th C) were the only people allowed to trade in Japan in certain areas such as Nagasaki. I had never heard about Christian missionaries from places such as Portugal and the many who were persecuted and killed.

This is very timely too - Christians are being persecuted throughout Asia at the moment, and indeed killed. Not much reported though.

It is long - too long. And could have been pulled in under 2 hours, I am sure, without losing much.

The story is one of belief and betrayal, and fascinating.

Based on a 1966 Japanese novel - which is probably better than the film, as so often with epics with multi-dimensional stories and themes and a myriad of characters.

I suppose INN OF THE SIXTH HAPPINESS from 1958 would be a good partner piece, this time about the persecution of Christians in China in the 1930s. That was filmed in Snowdonia, Wales, apparently and because not many Chinese lived in Britain in the 1950s, the kids in it were the posh offspring of diplomats etc!

An oddity for Scorsese maybe, and if you want hardcore action, then don;'t even bother. Glad I stayed with it though, after the slow start - this movie only really begins after at least half an hour, maybe 45 minutes.

Not so sure - Silence review by WP

Other reviews point out many of the positive aspects of this film while warning that it is not what most would call entertainment. Nothing wrong with that, we need films which inform and challenge. However, I think I would want to question many of the films assumptions. Is it really the case that all philosophies and religious beliefs are equally valid? Is there no such thing as truth? Do those who peacefully seek to promulgate their understanding of truth deserve to be equated with those who brutally suppress what they consider to be alien? Some may say that the film raises such questions, and to the extent that it does, it is welcome. However, it seemed to me that it was pushing the case for the prevalent "We're all just feeling different parts of the elephant, so let's not criticise anybody" view of faith. Well, you may be persuaded that the snake like object you are feeling is the elephant's tail, but watch out for it's bite.

Silence isn’t the first long film I’ve sat through in the cinema, but it is the first where it actually felt like a long time and made me feel rather glad that I had spent the extra money on comfy seats.

The filming and direction are indeed beautiful. However, the rest of the film just feels like it never really gets it together. It is very obviously trying hard to be profound, and to supply a deep insight into the events. However, to me it just misses the mark and ends up feeling disappointing. Fort example, the film builds (tenuously slowly) toward a final reveal which left me thinking “seriously, is that it?”

This is a tough film to watch but the Christian faith shown, the counterviews from the oppressors and the ethical dilemmas presented are very thought provoking - well worth a viewing

Two Portuguese Jesuits based in 17th-century Macau set off for Japan, in an attempt to find C Ferreira, a fellow Portuguese Jesuit who is said to have recanted his faith, which they do not believe is possible. In their quest for C Ferreira, they encounter much-persecuted Christian communities in various villages.

This is a long, unusual film. It is a bit slow and it will help if you have an interest in Christianity and/or in the history of Japan -- more particularly, the history of Christian communities in pre-modern Japan. Having said this, it is also a very interesting movie in its own way.

Ultimately, it is a philosophical tale rather than anything else: it asks questions such as -- what does it mean to have one's faith tested? What does it mean to betray one's ideas and convictions? When is it justified to give up one's principles? Are you a traitor if you do? And to whom? What is the truth and its value in a completely different culture that has a completely different approach to ethical values and ideas? Can you give up your convictions, and yet continue to be true to them and to yourself?

All these questions are deep and difficult and, in an interesting way, the film looks at them, through the prism of the 2 Jesuits parachuted in the middle of a repressive pre-modern Japan.

This is a troubling, disturbing, gruelling view. The antithesis of a feel-good movie. It is beautifully filmed with masterly cinematography and mesmerising scenes. Don't watch it if you like fast-paced entertainment or need a relaxing and enjoyable evening. It asks profound questions and lingers in the mind for a long time after the startling final scene.

I wanted to like it - Silence review by CW

I had high hopes for this movie having been born in Japan. After a while it just seemed endless, drifting and pointless. I got up and read the plot of the movie and thought okay now I know, so I need not watch. I agree that it could have been edited which surely would have made for a tighter more interesting movie.

This has to be one of the worst films I have ever watched. It is incredibly slow and the subject matter is very very very boring. It just does not engage on any level. Acting is poor; direction very poor, bad cinematography - so dark and bleak you can hardly see. I did make myself watch the end but it really isn't worth it.

Just not my cup of tea. - Silence review by JK

We have it 40 mins but gave up and put the disc back in the cover. It is slow and not what I had expected. Shame.

True to its title, Martin Scorsese’s Silence is a picture with much contemplation and little reliance on music to push the emotion. When the film opens in darkness, there are no words and only the sounds of a quiet Japanese field. When some Christians are tortured for refusing to apostate, there is no music and very little sound. And when a Jesuit is forced to contemplate the tough decision of renouncing his faith for the lives of others, the soundtrack drops entirely.

Scorsese doesn’t want to tell us how to feel in this story of two Portuguese Jesuits (Andrew Garfield, Adam Driver) seeking their mentor Ferrera (Liam Neeson) that has apostate in 17th century Japan. The director wants us to understand the maddening struggle of Andrew Garfield’s character of Rodrigues who arrives in Japan to find fearful Christians in hiding. The uneasier Garupe (Driver) helps Rodrigues bring a glimmer of hope to the secret Japanese Christians by holding confessions, communion and mass. The villagers consider them a blessing, but the two begin questioning their impact when the Japanese government comes to force apposition on all the villagers. A few refuse to disgrace the god they worship and are sentenced to slow deaths.

The two Jesuits remain in hiding, watching helplessly as those discovered to be Christians are crucified by the sea as the tide comes in to drown them. Though Rodrigues narrates much of this exposition, he doesn’t divulge his true feelings about watching these men die, most likely because we already know them. There is no swelling music to emphasize how tragic this torture is. The deaths of the men who drown are drowned out only by the sounds of a forceful tide. Their bodies are taken down, burned and the bones scattered into the sea to prevent a Christian burial. No music and no dialogue are present with the exception of Rodrigues’ explanation of the events over the course of a few days. It is a quiet and sorrowful death without much explanation for such atrocities.

As the death toll mounts, Rodrigues finds himself coming down with a crisis of his own faith. The dwindling number of Christians in Japan and the lack of god’s guidance in his quest to find Ferrera bring Rodrigues to the brink of madness. When the Japanese government eventually takes him in, they continuously force him to apostate less he watch even more Christians die. His faith is put to the test in many ways. A dirty thief continuously follows Rodrigues, selling him out, renouncing Christ for the Japanese forces that corner him and groveling to be forgiven for his sins multiple times. The Japanese Inquisitor cackles and leers at Rodrigues in the many conversations they have about religion and why the Japanese government does not need Christianity.

And then comes one of the most powerful scenes where Rodrigues finally confronts Ferrera in a deeply emotional talk of god and his importance. Though Ferrera speaks as though he believes this new way of perceiving god, Rodrigues can see the glimmer in his eyes that he didn’t want to do this. As the Japanese interpreter continues to antagonize Rodrigues as well, there is a question of how long Rodrigues can be loyal to his faith before it means nothing when others die. It’s a powerful performance from the surprisingly effective Andrew Garfield, as are the dependably strong actors of Liam Neeson and Adam Driver.

One might assume from this story that this is a pro-Christian, anti-Japanese movie. One might even side with the Japanese in how the government is simply trying to remove what they consider to be a harmful outside practice. Scorsese thankfully tries not to favor right or wrong in this picture. In his own unique method of beautiful and simple filmmaking, he’s conceived a picture that attempts to seek an understanding of religion. Rodrigues’ quest finds him hallucinating visions of saints and Jesus, trying to adhere to their teachings, but fearful of not remaining true to his faith.

Silence ends with a somber questioning if faith can remain alive in the heart when it cannot in physical practice. It asks if there is any importance when there is no answer when life hurdles towards a slow, painful and quiet end. I don’t think Scorsese so much wants us to root for Rodrigues to prevail as much as he wants us to understand his madness, his drive, his questioning of life. Maybe there is some answer buried beneath the violence and hatred of competing religions or maybe there is no answer for life that ends with whimpers of faith. If we listen just close enough to this picture, we will know the answer, but the message isn’t so much important as the listening itself. And, per Scorsese’s usually powerful directing abilities, he offers plenty to intrigue the eyes, the ears and the mind.