Rent The Playgirls and the Vampire (1960) 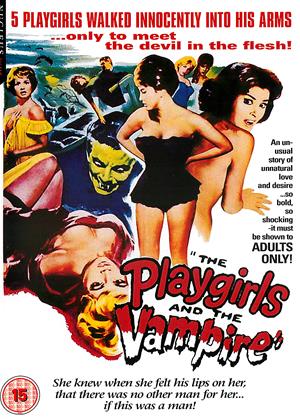 Synopsis:
When the road is blocked by a landslide during a riging storm, a van load of shapely showgirls and their manager are obliged to spend the night at Count Gabor Kernassy's remote ancestral pile. Little do they know, however, that the Count's 200 year-old antecedent and deadly double, a baleful blood drinker, is prowling the castle corridors in search of one last fling.
Soon the "playgirls" find themselves stripping nude for a killer from beyond the grave! To make matters worse, Vera, the dance troupe's loveliest member, turns out to be the reincarnation of Margherita, the naughty Nosferatu's long lost love! Will Gabor (Walter Brandi) manage to rescue Vera (Lyla Rocco) from the clutches of this horrible sexy vampire, or will she be trapped for eternity in a fiendish flesh and blood show with the undead?
Actors:
Walter Brandi, Lyla Rocco, Maria Giovannini, Alfredo Rizzo, Marisa Quattrini, Leonardo Botta, Antoine Nicos, Corinne Fontaine, Tilde Damiani, Erika Dicenta, Enrico Salvatore
Directors:
Piero Regnoli
Producers:
Tiziano Longo
Writers:
Piero Regnoli, Aldo Greci
Aka:
L'ultima preda del vampiro
Studio:
Nucleus Films
Genres:
Classics, Horror
Countries:
Italy, Classics, Horror

Rent other films like The Playgirls and the Vampire

Reviews (1) of The Playgirls and the Vampire

Spoilers follow ... - The Playgirls and the Vampire review by NP

A bus carrying a menagerie of chorus girls and their manager Lucas (Alfredo Rizo) is stopped in its tracks by a storm and the crew rather insistently beg Count Gabor Kernassy (Walter Brandi) to stay the night at his splendidly gothic castle. Would you expect his strict instructions not to leave their rooms until dawn to be adhered? Of course you wouldn’t, and you’d be right. Before long, one of their number, Katia (Maria Giovannini) has gone missing after investigating the building’s crypt.

The bleakness of the location, highlighted by Aldo Greci’s crisp black and white cinematography, successfully obfuscates the entirely traditional premise of the story-telling.

Events conspire to ensure the guests have to remain at the castle for an extended period and it isn’t long before their fallen comrade has been forgotten and the manager is encouraging the troupe to practise their skimpy routines in the main hall, much to the chagrin of the chaste housekeeper.

Delightful Vera (Lyla Rocco) begins to feel a connection with Gabor, and it turns out she is a dead ringer for his deceased wife. And so the clichés continue, with Piero Regnoli’s nice gothic directional touches (and Aldo Pigar’s bombastic musical stings) keeping things fairly interesting. Every vampire film ‘box’ is ticked, but ‘The Playgirls and the Vampire’ is an entertaining chiller played with a certain wide-eyed vigour, Rocco especially, who has a look in long shot very similar to that of Edith Scob in ‘Eyes Without a Face’ from the same year.