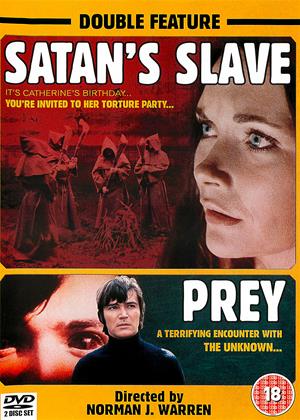 This is a terrific, wintery horror film not dissimilar to a Pete Walker production with, I suspect, slightly more available budget. That said, star Michael Gough agreed to take a pay reduction for his Cushing-like role as Alexander Yorke, Uncle to suddenly orphaned Catherine (Candace Glendenning). This haunted house mystery is steeped in what I really love about British films around this time – beautifully spoken RP, skeleton trees, rolling grounds surrounding a sprawling mansion miles away from anywhere, and some excellent performances from a mainly little-known cast; English countryside so icy you could almost bite it.

Catherine’s bereavement puts her entirely at the mercy of her Uncle, who is only too pleased to be of assistance. And yet such is Gough’s excellent performance that there is clearly much unsavoury depth to his character (if only he’d put this much effort into his role as Arthur Holmwood in Hammer’s 1958 ‘Dracula’; but I digress…). His kindness slowly becomes suffocating, and we are entirely on Catherine’s side.

Cult director Norman J. Warren pulls out all the stops to make this as spooky as possible. Seedy cousin Stephen (Martin Potter) and secretary Frances (Barbara Kellerman – dubbed by Stephanie Beacham) ensure their shadowy characters are as imposing as can be and, although the story is a slow burner, the atmosphere of foggy unease is wonderfully conveyed.

Unsurprisingly, the narrative is laced with sporadic scenes of Satanic cults, ensuring we are aware – as if we weren’t already – that evil forces are behind everything. There are harder and softer-core versions of this; I don’t know which version I saw – somewhere between the two, possibly - but there are a few gloriously bright moments of gore to punctuate the autumnal gloom. There is nudity too, and no dilution of some of the unsavoury relationships between certain characters. An obscure gem, my score is 8 out of 10.