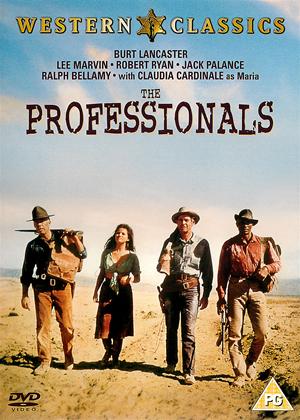 Sign up
The Life and Death of Peter Sellers

Reviews (2) of The Professionals

'The whirlingest dervish you'll ever see.' - The Professionals review by AS

Westerns don't get any better than this. Not many movies get better than this. Four men who understand about honour, commitment and a reason to die. Marvin, Lancaster, Ryan and Strode play it to the hilt. Direction, script and cinematography were Oscar-nominated. The script should have won: there are more great one-liners here than in fifty latter-day blockbusters. A truly great movie from a great source novel

The Mild Bunch - The Professionals review by Count Otto Black

This is one of those films from the last great flowering of the Hollywood western which initially inspired and later tried to rival those upstart audience-stealing spaghetti westerns, of which "The Wild Bunch" is the best-known and probably the best all round. Unfortunately this isn't one of the classics. Its glaring flaw is that, having introduced us to a super-competent hard-as-nails quartet of mercenaries, it doesn't give them enough to do. Apart from two fairly large battles, one of which doesn't involve our heroes at all, there are surprisingly few action scenes, and some very long stretches in which the protagonists dither about in the desert arguing about the morality of their mission, or inexplicably running away from small groups of adversaries they could easily defeat.

The casting is interesting. Lee Marvin does what he always does and Woody Strode is just Woody Strode, but Burt Lancaster, who always gave a far better performance when he was playing a man who wasn't altogether nice (if comic-books had grown up a bit sooner, he might have been a very convincing Batman), steals it as the most amoral of the heroes, and the casting director was savvy enough to realize that Jack Palance had enough charisma to sometimes play a character who wasn't his usual one-dimensional baddie. Robert Ryan, however, is totally wasted. It's a logical nod to realism to include as part of the quartet a man whose speciality is looking after horses, but in visual terms he has nothing interesting to do, so he does almost all of it offscreen and ends up appearing to be a waste of space.

It's quite well-made (apart from the terrible day-for-night photography typical of that era) and the cast do a good job, but there simply isn't enough action. I got the impression that the movie probably went over-budget and they had to scale down the firefights at the last minute. For example, Lee Marvin's character is signposted as an expert with ultra-modern weapons such as machine-guns, which are indeed shoehorned into the plot and repeatedly referenced, but he barely gets to use them at all. And Burt Lancaster brings up a subplot involving a vast horde of buried gold which is completely forgotten about for the rest of the film.

Overall it's not bad, just a bit slow and lacking in the excessive gunplay it promises to deliver. For similar films that do exactly the same job far better (and have some of the same cast), see of course "The Wild Bunch", and also "Vera Cruz", which is vastly more spectacular, surprisingly hard-hitting considering it was made in 1954, and features a much better antiheroic performance from Burt Lancaster as a charming rogue you can't help liking even though you really shouldn't.