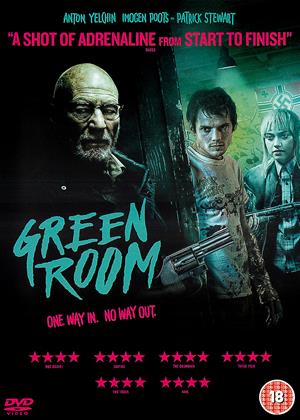 The Director's last film Blue Ruin was widely praised and rightly so, This film is also an exercise in slow burning tension that once in a while explodes into action. A Punk band play a set to a bunch of Nazi skinheads in a remote venue. On their way out, they see something they shouldn't and the movie proceeds from there into a smart psychological game of cat and mouse. An intelligent action movie with a dash of horror.

This is a hyper-violent and bloody movie, full of Grand Guignol (a la Sam Pekinpah) so the squeamish should avoid. Ditto with the sequel Blue Ruin - also very violent and most people end up dead.

Surprising to see Patrick Stewart in this small indie movie, but the script is original and good, so maybe that's why/ Star Trek fans will be baffled though - no aliens or space ships here!

Some interesting music choices - worth watching to the credits to see who wrote the tracks and did them originally (Dead Kennedys etc). Awful music generally, but... Good acting and script.

The only thing I didn't really believe is that a neo-Nazi white power base cab exist like that in the USA with no-one being interested.

If you thought Jeremy Saulnier’s film Blue Ruin was sluggish, this boring mumblethon, best watched with subtitles, is worse. Even Patrick Stewart, here slumming it, is reduced to a muttering monotone. A band is trapped in a room and attacked by drug dealers. With poorly drawn characters, ugly lighting and a plot that has nowhere to go, it’s purgatory to be stuck in there with them. It’s like sitting through a lo-budget, drawn-out student film. Doses of gore are added to arouse those who find such things arousing, but they’re pure cliché. Worst of all, as in Blue Ruin, Saunier can’t direct actors, none of whom will be putting this on their résumé. It has received good reviews from obscure journals and gore geeks, but when Imogen Poots finally utters the line ‘Tell me those stupid fucking words are his last’ it’s a relief that her wish comes true. Assault on Precinct 13 this isn’t.

Great if you like violence - Green Room review by JJ

I enjoyed movie worth a watch, natzi racist thugs, but can get boring lots of violent thugs, only watch if you don't mind thuggish violence..

Neo-Nazi Skinhead /Punk Warehouse Gig turns Nasty for a Gigging US Punk Band on the road .

Caught up in Murder and Drugs. its Kill or Be Killed .

Why did they bother? - Green Room review by IW

Before five minutes was up I was reaching for the FF button. Fast forwarded for a while and then switched off. What Patrick Stewart saw in the script is quite beyond me.