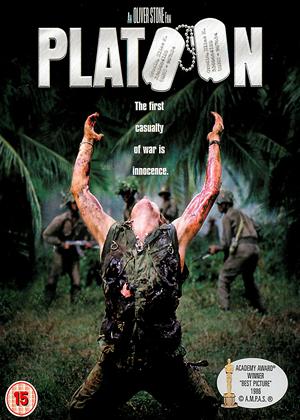 Classic anti-war film, one of the best films of the 1980s - Platoon review by RP

The Vietnam war spawned many excellent films as the US examines in excruciating detail the horrors of a war in which over 58,000 US servicemen lost their lives in an ultimately un-winnable conflict. Memorable films include 'The Deer Hunter', 'Apocalypse Now', 'Full Metal Jacket' and even 'First Blood'. 'Platoon' is another of these memorable films.

Directed by Oliver Stone and apparently semi-autobiographical, the Oscar-winning film tells the story of the day-to-day activities of a platoon serving in Vietnam through the initially idealistic eyes of Chris Taylor (played by Charlie Sheen) who has dropped out of college to volunteer. It shows how new recruits are absorbed into the culture of the war and influenced by longer serving men, and the atrocities that are casually committed. It also tells of the ultimately deadly conflict between two NCOs, Staff Sergeant Barnes (Tom Berenger) and Sergeant Elias (Willem Dafoe).

Not only is this a classic anti-war film, it is one of the best films of the 1980s. 5/5 stars – highly recommended. [Aside: Wikipedia has a fairly comprehensive list of Vietnam war films – there are even more than you expected! Search for 'Vietnam War in film']

Muddy and bloody camouflaged soldiers shouting over machine gun fire in pigeon afro-carribean american using army acronyms, get the GDV to the XSD by the PLQ man. It was difficult to tell who was who, what they were doing and decipher what they were saying. Apart from that, it was a poignant cynical view of the Vietnam war. How did it compare with the other 715 Vietnam war films? OK but not in the top 10. Johnny Depp plays the most fleeting cameo you will ever see, Forrest Whittaker is not much more. It is mainly about Sheen, Berenger and Defoe who are good but I would definitely not have given the Berlinale Silver Bear for best director to this film nor the Oscar, but we all know how how corrupt the awards are!

Plat-ooooooooh!(n) - Platoon review by AM

This is a (Oliver)stone-cold classic - the best film ever made about the Vietnam war, and in my mind one of the best films ever made. I felt like I was there, amidst the horror and amidst the banality of war and life in-between skirmishes. War is hell.