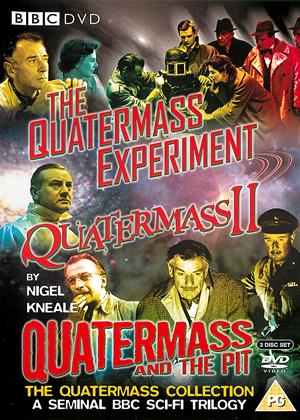 Reviews (2) of The Quatermass Experiment

Not what it says on the tin! - The Quatermass Experiment review by Count Otto Black

I was surprised to see this series listed here, because I thought that, as with so many of their early shows, the BBC had lost it forever. So before renting it I checked, and I was right. Out of six episodes, only the first two escaped deletion, so one-third of the story is what you'll get if you rent this! The General Info page gives no indication the serial is incomplete, but if you look at the very bottom of the DVD page, you'll notice it mentions that the DVD extras include the scripts of the four lost episodes.

Alternatively, you could rent the Hammer movie version. It's seriously flawed by the hideous miscasting of Brian Donlevy as the hero because they thought they needed an American star to boost overseas sales, but is otherwise excellent, and it doesn't have two-thirds of the story missing. On a happier note, the BBC managed not to destroy the second and third Quatermass serials, so if you rent those you'll get the whole thing. Anyway, since the rental company didn't see fit to tell you that more then half of what you were hoping to watch isn't on the disc because it doesn't exist, I thought maybe I should.

Only two episodes - The Quatermass Experiment review by RD

Archeologically interesting, but as the brilliant climax is missing because there are only two episodes, it is disappointing.