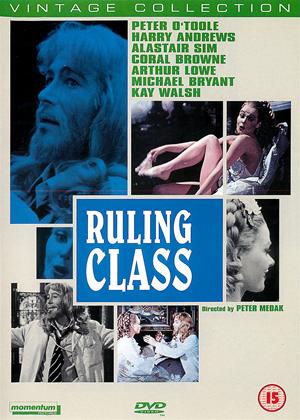 Synopsis:
Based on Peter Barnes' hit play, this caustic, hilarious and irreverent black comedy has rightly become a cult classic. The House of Gurney has a family problem - namely the 14th Earl of Gurney (Peter O'Toole) who thinks he is Jesus Christ and when restored to 'normalcy', turns into Jack the Ripper. Unfortunately, the young earl is also the sole heir to the family fortune, so his relatives go to great lengths to trick him into siring a new heir. Then they can institutionalize him and gain access to the money through the child. But the 14th Earl of Gurney has a few tricks up his sleeves...
This controversial tragicomedy managed to condemn just about every section of British society - from the public school system to the Houses of Parliament, and from the Church to homosexuality.
Actors:
Peter O'Toole, Alastair Sim, Arthur Lowe, Hugh Owens, Harry Andrews, William Mervyn, Coral Browne, James Villiers, Hugh Burden, Michael Bryant, Henry Woolf, Griffith Davies, Oliver MacGreevy, Kay Walsh, Patsy Byrne
Directors:
Peter Medak
Producers:
Jules Buck, Jack Hawkins
Writers:
Peter Barnes
Studio:
Momentum Pictures
Genres:
Classics, Comedy, Drama

Sign up
The First Day of the Rest of Your Life

Reviews (3) of The Ruling Class

How times change. - The Ruling Class review by RhysH

When the Peter Barnes's play "The Ruling Class" was first performed at the Nottingham Playhouse (1969) Harold Hobson writing in The Sunday Times described it as "a scorching and savage tragedy". A tragedy it is but it is played through anarchic humour.

The film follows the play very closely as it would with Barnes having written the screenplay. It is a vituperative satire on a country ruled by incompetent old Etonians!

Peter O'Toole is completely OTT but you couldn't play the part any other way. There is a fine cast of British actors. For me, two stand out performances came from Alistair Sim as the bumbling bishop and James Villiers as the incompetent buffoon soon to be MP.

This is a curiosity piece and has not aged well. It is so dated and is in the same camp therefore as The Magic Christian; No Sex Please, We're British; There's a Girl in My Sleep; and even the Beatles baffling Magical Mystery Tour TV film - and even Oh What a Lovely War, the film. ALL are very 1960s. Most are so stagey too, theatre plays not adapted much for the screen.

This is so long - I actually read a book while enduring all two and a half hours of it, because it was so meandering and, yes, dull. Not even an all star cast can save this from its overbearing tedium and failure as drama, however surreally clever it thinks it is. Watch Alistair Sim in the black and white 1951 Scrooge instead and the brilliant Dad's Army 1970s series, 'discriminatory language which may offend' and all.

Everything about it is horribly dated - the fashions, concept, music, even the satire because the elite now is not the aristocracy or the church or old white men dreaming of the British empire at all. No, the elite that rules over us now are those imposing the orthodox ideology of political correctness and wokedom on us all. In many ways, the Brexit vote was against their aloof smuggery. That is the new elite.

So this satire which may have seemed shocking in the last 60s (the theatre restrictions from the Lord Chancellor's office only ended in 1966) is now a museum piece and utterly irrelevant. After all, Eton now is at least 20% BAME and women dominate many professions too, many privately educated.

Listening to the random musical sketches in this I was struck by how it may well have inspired Dennis Potter to write The Singing Detective and his other TV dramas.

2.5 stars rounded up. Watch for curiosity, not entertainment or humour, because if you do the latter you'll be sorely disappointed.

I am a great fan of old movies, but this was unwatchable, it was so boring with O'Toole going through his OTT phase that I gave up after 30 mins. Who knows maybe the best bits follow......