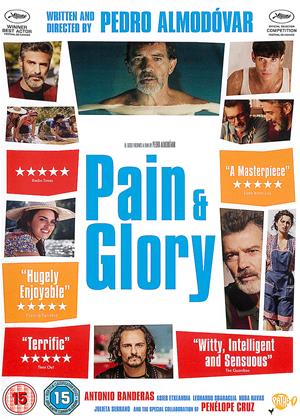 Synopsis:
Salvador Mallo (Antonio Banderas) is a veteran film director, afflicted by multiple ailments, the worst of which is his inability to continue filming. His physical condition doesn't allow it and, if he can't film, his life has no meaning. His mixture of medications, along with the occasional flirtation with heroin, means that Salvador spends most of his days prostrate and forlorn. This drowsy state transports him back to reflect on his childhood in the 60's, when his family emigrated to Paterna, a village in Valencia, in search of prosperity, through to the appearance of his first desire and his first adult love in the Madrid of the 80's.
In recovering his past, Salvador finds the urgent need to recount it, and in that need he may also find his salvation.
Actors:
Antonio Banderas, Asier Etxeandia, Leonardo Sbaraglia, Nora Navas, Julieta Serrano, César Vicente, Asier Flores, Penélope Cruz, Cecilia Roth, Susi Sánchez, Raúl Arévalo, Pedro Casablanc, Julián López, Eva Martín, Sara Sierra, Constancia Céspedes, Rosalía, Marisol Muriel, Paqui Horcajo, Alba Gómez
Directors:
Pedro Almodóvar
Producers:
Agustín Almodóvar, Ricardo Marco Budé, Esther García, Ignacio Salazar-Simpson
Writers:
Pedro Almodóvar
Aka:
Dolor y gloria
Studio:
Pathe Distribution
Genres:
Drama
Countries:
Spain, Top 100 Films, Drama
Awards:

Reviews (7) of Pain and Glory

This film was a joy for me, so interesting, with a story line that kept me glued to the film, and a cast that played their roles to perfection, with special mention of the young actor playing the lead as a boy, a potential star in the making.  The nominations that film has garnered this award season are fully justified and this has to be one of the very best films of 2019!

Almost too personal - Pain and Glory review by TE

A good film, but not up with Almodovar's best, possibly because it seems to be overtly autobiographical and thus misses out on the universal relevance that his best work has.

As ever, there is deep satisfaction in the composition of every frame, with beautifully balanced colours and lighting.

Perhaps a better title would have been "Addiction" (the title of a monologue within the film). The story is full of addictions: to heroin, to memories, to desire and to pain.

Largely agree with TE's review. In the film there's a poster on a wall advertising Fellini’s 8 1/2, and this is one of those type of films which pretty much all directors of a certain age feel the need to make - that self-disclosing semi-autobiographical drama in which they look back on their youth, career, trials and tribulations & so on. It works to a degree - not least because of a superb, nuanced performance by Antonio Banderas as an ageing, gay, Madrid-based auteur; and there are some lovely touches, especially in the flashback scenes to his childhood and his relationship with his mother. But the film is a little self-indulgent, as these sort of films tend to be, and it tends to be much heavier on the 'pain' than the 'glory' (I find people snorting heroin impossible to watch, and there's an awful lot of this - agree with TE that 'Addiction' would have been a more apt title), although the last half hour certainly leaves us on much a much more uplifting note. Rather than having a plot as such, the film slips from one short story to the next, and whilst I've not a problem with this at all in principle, I must admit I was left a little underwhelmed by it all somehow. This leads me to suspect that unless you're die-hard fan of Almodóvar, you'll most likely see it as not one of his best.

No entiendo! - Pain and Glory review by BE

This film was very hard going for me. I don't speak fluent Spanish and yet again, some bright spark chose to display the white subtitles on the bottom of the actual film. Thus, when the film was of a light hue, it was very difficult to read them. It was a case of keep pausing the film to read what the dialogue was. The continuity of viewing was so disruptive, it spoilt the film. I don't feel I can comment any further apart from adding that Antonio Banderos looked very natural in his role and displayed his excellent acting ability. I was also non-plussed with the ending.

There's no excuse for using small white subtitles. Much of the film was filmed against light/white backgrounds making it very difficult to read them. Foreign language films need to be made accessible with good subtitling and there was no effort made to do this with this film. It ruined the experience for me.

Tedious, Pretentious, Self-indulgent Drivel from THE most Over-rated Director of our Age. - Pain and Glory review by PV

This film was AWFUL, But then I tend to think Almodovar is THE most over-rated film director EVER. If a British film director made drivel like this he'd get slated. Maybe there is a Hispanic bias at work here because his mediocre movies get showered with praise.

I turned off before 1 hour as I could not stand any more.

Pointless, pretentious, dull, tedious, deeply boring - it could be a BBC TV drama!

FOR A DECENT film about drugs watch 'OSLO, 31 AUGUST' which is a BRILLIANT 2011 Scandinavian film.

Not glorious - Pain and Glory review by JR

I found little to like in this film. It was a series of self-indulgent vignettes filled with Almodovar's trade mark vibrant colours, but the content was dull. The copious consumption of heroin and other drugs in real time became tedious and unwarranted, and the many flashbacks to Salvador's childhood were sugary sentimental fantasies. Penelope Cruz plays his mother with brio, but a woman saddled with a life of drudgery and poverty would not have looked anything like she does. Although the title 'Pain and Glory' hints at greatness; this is a slight, minor work and is for Almodovar groupies only.

Within the non-linear path of Pain and Glory is a subtle sweetness to the strangeness of age. Antonio Banderas absolutely melts into the role of an aged director who hasn’t come to terms with himself or his past. By the end of the film, he won’t have fully come to a realization and newfound love of his life but more of an understanding. A surreal sensation that life has a certain allure with age and our fears start to simmer to a point we hope we can step out of our element.

Banderas plays director Salvador Mallo. He has come a long way from being a poor kid growing up in a village of illiterate builders. Even as a child, he was found to be so smart that he could even teach reading and writing to adults. Soon, he would be chosen to attend a school where he would finely tune his talents. Salvador grows up to become a director but we won’t see that successful and chaotic part of his life.

Instead, we catch up with him in his old age where many years have passed since the film that defined him. Quieter and his health slowly passing, Salvador finds his mind lingering to the past. His film has been restored and will soon be having a public screening for the most influential films of Madrid. Rewatching the film has reignited a certain spark within him. It’s not enough to make him eager to hop right back into directing but intrigued enough he may start writing. He also reconnects with his actor pal who he hasn’t spoken to in years. A questioning comes up for how much they need each other and how much Salvador needs him for the drugs to tame his pain.

There’s a lot of Salvador’s mind as his blank expression reveals little more than an aged face of a white beard. He informs us about his medical issues he’s developed over time in a mostly analytical mindset, complete with a computer-like synth of his brain buzzing with the internal workings. We hear this music during any scene where Salvador seems more within his mind than anything else, thinking more about his next move than anything else. Simpler scenes of contemplation feature a curious melody of pondering how wonderful life can be with all its ups and downs. It’s almost as though we can feel a smile forming behind his stoic face.

There is, however, some genuine happiness to Salvator’s tale. After publishing a one-man show, an old friend comes to visit him. They had been romantically involved but this man has moved on and had children. But, wait, he’s divorced. Could a new romance form? Maybe but the real question is whether or not Salvador is willing to pursue another relationship. Everywhere around him he notices marriages failing and friendships crumbling. The human spirit seems to die with age, the same way Salvador refuses to fully acknowledge his illness and condition, covering it up with drugs. He’d rather live within the joy of cinema, where writing enraptures him like no other pleasure. Even if that the nostalgic love of film comes with the odor of urine from dirty theaters. Things change with age and nostalgia is weird like that.

Pain and Glory is such a personal experience of a picture that invites us to crawl within Salvator’s peculiar mind and take in his troubles. The humanizing element is strong by portraying him as a man with many problems, refusing to leave his place at times. There’s a bittersweet ending where he happens upon some writing from a student he had decades ago. He could pursue the clues to find this man but he doesn’t, remarking that it’s only important that it somehow found its way back to him. The closure comes for us in different ways and it's up to us decide how we deal with it. Salvador deals with it in a way that may not seem like rise for the loner director but certainly a relatable and human response.