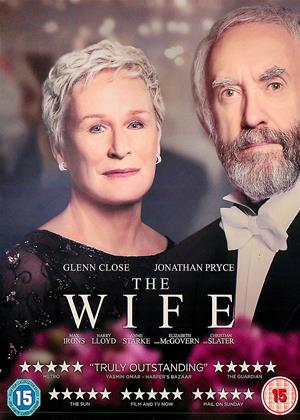 A for acting. - The Wife review by NC

Has to be a 4 as, although a bit stage play than film, has actual acting going on. Forget what is like. No wonder Glenn Close up for some awards etc.

Mediocre and Unmemorable - The Wife review by JR

I have not read the novel from which the script was adapted, so it may be the fault of the original work, but this is leaden and predictable. Even the likes of Jonathan Pryce and Glenn Close fail to give it the spark of life, and the best performance is that of Christian Slater. If Glenn Close wins the Oscar, it will be in spite of this film, rather than because of it.

This is a good, well-made film, with great performances from the leads, especially (in my view) Christian Slater. But it never really grabbed me, and at the end I didn't feel moved, just a bit "meh". I'm not sure why this is, but really I think it felt like a bit of a theatre production, and was quite slow moving. The revelation wasn't particularly suprising, and it seemed to me there was no sense of closure at the end.

This all sounds quite critical, doesn't it! It was one of those films where I kept waiting for it to really get going, and it never really seemed to. But there is nothing actually bad about it - it just didn't really work for me.

Predictable and Rather Boring - The Wife review by EJ

I was really looking forward to this dvd coming, as it has a strong cast and a theme I thought would be right up my street, but alas, another boring movie that just doesn't hit the mark. The storyline is so predictable it just fills you with disappointment and although the acting was good (particularly Jonathan Pryce; I didn't actually think much of Glenn Close's acting and was surprised she was up for an Oscar nomination) it couldn't hold my attention. Again, disappointing.

Expected too much - The Wife review by BE

An okay movie mainly held together by the acting. Glen Close (looking and acting like an American Judi Dench) and Jonathan Pryce were excellent but Christian Slater, in a supporting role, was even better. Somewhat disappointed after all the highly rated critic reviews.

A Winner for those who enjoy something out of the usual run of films. - The Wife review by PR

So much of this film obviously went unnoticed by some of the reviewers. The acting was excellent and the script sharp. One of the best films I have seen this year. Such a change not to have to battle through mumbling actors and terrible lighting. Glen Close deserved her nomination for an Oscar in a part that suited her particular style of acting. It is amazing how the reviews differ as if we all saw a different film but then that is perhaps why it was so good - it stirred our emotions in different ways. 4 star definitely.

It was an ok film - The Wife review by WE

It was as other people have said predictable

but I do like glen close but before the end you could tell what had been going on.

Interesting and well shot - The Wife review by ST

I really enjoyed this film, despite the slightly predictable story line. As mentioned elsewhere, the acting was good (although I felt Jonathan Pryce was at least the equal of Glenn Close and I did not particularly like the mannered acting of Christian Bale) and overall it felt like a quality production. It was nicely shot, which added to the atmosphere, and well directed.

Predictable - The Wife review by KW

but having said that the acting of the leads was excellent and it was worth watching the film for them.

Don't know if I've rated higher because of the dross we've been seeing but this was nicely acted and a decent story. Worth a watch.

Interesting Movie - well worth watching - The Wife review by PC

Glenn Close is rarely in a bad movie and gives a touch of gravitas to every role she plays. The Wife is one of only two films from this years Oscars which I wanted to see. Superb acting throughout with great support from Jonathan Pryce. It is slow burning, so if you like action fims this may not be to your liking. I could have done without the elderly sex scene in the first minute of the film, but a suppose it underlined the lengths to which Glenn Close's character was willing to accommodate her husband - a vane self-absorbed man. I will not say any more as I do not want to give anything away. Recommended.

It’s astounding how time and family can greatly reshape our bitterness with ourselves. There’s a perfect moment that encapsulates this within The Wife. An aged couple has a fight about infidelity that has been brewing for years that grinds to a stunning halt when they receive a phone call that a baby has been born in the family. Shouting and rage quickly turns to tears and smiles as the two appreciate how they’ve come. It’s this very human nature that makes this film such an intoxicating journey of how complicated life can become, carrying all the bitterness of the past.

Glenn Close plays Joan Castleman, an aged wife of the high-profile author Professor Joseph Castleman (Jonathan Pryce). He has been writing a long time and is overjoyed to hear in the middle of the night that he has won the Nobel Prize in Literature. Joan is happy as well but there’s an uneasy sensation she can’t shake. As we learn slowly in flashbacks, Joseph hasn’t been the writer of his many revered novels; it was Joan the whole time. Having gotten involved with Joseph since her early days of writing as a student, Joan has devoted her life to writing novels for her husband. They had a child, David, but Joseph mostly handled the son on his own while Joan was given plenty of time to write. Her mind lingers. Would she have won the prize if her work was published under her name? Would her grown son (Max Irons) not be so distant had she been there more for her? These are all thoughts that haunt her constantly, especially with a nosy reporter (Christian Slater) hounding her and drudging up her messy history.

There’s a lot of fine performances but Close holds the picture together. This is not just for the scenes where she explodes on her husband for his constant cheating but also for scenes where she boils quietly, letting the regret and anger stew within her unsure eyes and a subtly nervous twitch. There are a handful of flashbacks that make her plight more clear as the picture progresses but it’s really Close’s performance that says it all. Her constant shifting of trying to be a wife, mother, and woman with desires for more is a battle of her own that is being waged more within herself than that of her husband. It’s also a tragic fight when considering how little control she seems to have over her destiny. The slightest shifting of the winds in her favor usually sweeps her back by one confounding issue or another with her family.

What’s most tragic about such a fantastic performance is how we can see these muddled aspects within ourselves, where standing up for yourself when you feel you’ve been wronged for years is not simple as one triumphant speech. Joan never gets that moment. She comes close but it always seems out of grasp from a personal aspect. She could ditch her husband how much would she be throwing away? Would her son be worse? Would she live a lesser life? More questions than swirl in her mind while attending dinner parties and ceremonies where she’s exceptionally uncomfortable.

The Wife latches onto the heart and keeps squeezing with an uncomfortable and intriguing bit of drama that asks many tough questions with no easy answers. There’s a lot of questioning of the film’s many philosophies about the nature of writing and convenience marriages. But for Close’s performance alone, the eyes remain fixed on a character we want to see come out of her shell. She may not but we want to see it, keeping a close eye on what she’ll do next.