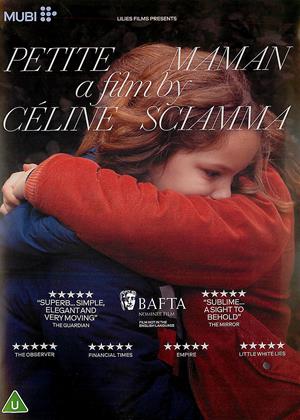 At face-value Petite Maman could have been twee, but the tale of an eight year-old girl who encounters her own mother as an eight year-old in the woods near her late grandmother's house really is something special. Sidestepping sentimentally and corniness, this is a note-perfect piece of fiction that reminds us that we were all eight once, even our own parents. It's very relatable, calm, and completely convincing thanks to the lovely story, good script. and natural performances.

“Secrets aren’t always things we try to hide. There’s just no one to tell them to.”

French director Céline Sciamma's beautiful, very short piece deals with some profound themes with a light touch. It focuses on the connection between an 8-year-old girl, Nelly (the perfect Joséphine Sanz), and her mother, Marion (Nina Meurisse), through a simple leap of imagination. Nelly is a bright and empathic child whom Sciamma first introduces in the retirement home where her grandmother had lived until quite recently and where Nelly’s mother is also saying goodbye. Sciamma subtly — but very discreetly — conveys the change in this young family’s life and the individual healing that each of them do to move forward, and of course at a time when Nelly's identity is still in formation. Sciamma is remarkably skilful at banishing the intellectual noise of adulthood, prioritising sensation and the emotional intuition by which we steer as children, and a very clever magical-realist plot device (involving Sanz's real-life twin sister Gabrielle - also excellent) is very well used to evoke the act of wondering what our own parents went through when they were themselves children. Sciamma gives Nelly the chance to find out, and the plot device serves as both an extension of Nelly’s natural desire to understand her mother and a chance to work out certain things she can’t quite say to her, and to investigate where her mother’s melancholy may have originated.

Sciamma’s tone is playful but never twee, and by casting the sisters Sciamma benefits from the bond that already exists between these girls, which reads here as a kind of instant complicity: a messy crepe-making scene in particular is absolutely wonderful. We sense that Sciamma has asked them to participate in a very personal exercise, but one that’s open-ended enough for them to project themselves. In our children, we often see reflections of the children we once were, we just need a little magic to access those same memories. In doing so, “Petite Maman” definitely casts a very effective spell indeed.

Slow, deliberate, understated 70min French ‘film’ with long silences, long static shots of nothing in particular, naturalistic dialogue about nothing in particular. And no score to add any emotion (the trailer cheats by adding an emotional score that’s not in the film). The DVD sleeve calls it a ‘masterwork’. Joke. The director has no idea how to make a film. Check out the interview with her on the Xtras. All she talks about is the concept.

It’s about two 8yo girls (played by twins) who meet in the woods. There’s a message somewhere in here about loss, but who cares when it would be more interesting to watch paint dry. Perhaps you’re meant to close your eyes and just listen. If so, make it a radio play. Except you’d need to cut those silent longueurs. Which would reduce the run-time to less than half-an hour. You could also cut the numerous filler scenes of the girl brushing her hair or teeth, the father shaving, the mother doing a crossword, the girls making pancakes etc. In fact get a real screenwriter to rewrite the whole film, give it to a real film director, get in a composer and start from scratch. Never has 70 minutes seemed so long.

The sisters taking main parts in this film are fantastic in their characters, the story line is unusual but makes sense as long as you give it time, and the film is one of those that stays with you. It's not loud, fast paced, action packed, which makes it so much better than a lot of todays films.

Perhaps I don't have sufficient "soul" to appreciate this film but, regrettably, its only redeeming feature is that it only lasts 70 minutes.

I had hoped that I would be bowing out of Cinema Paradiso on a high but it wasn't to be.

Having heard how good and perfect this film is, I was really looking forward to it. But it was incredibly boring - long silences, very little plot, failed to engage my emotions at all. The one star goes to the 2 little girls who were allowed to behave like real 8 year olds once or twice.