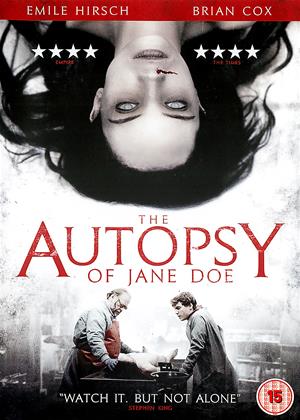 Rent other films like The Autopsy of Jane Doe

Reviews (7) of The Autopsy of Jane Doe

Nice one for the chiller cabinet. - The Autopsy of Jane Doe review by JG

Very claustrophobic; Autopsy of Jane Doe could be a play. The actors gave everything to material.

In parts overblown, but I was genuinely scared in some scenes, as they increased in intensity.

Dead scary - The Autopsy of Jane Doe review by AS

Is Brian Cox the world's busiest actor? Does he ever make a bad movie? Here he is again in yet another small but (almost) perfectly formed gem. Just when you thought the doddering horror genre was on the verge of finally frightening itself to death, up comes this shot in the arm to resurrect the stretcher case. Okay, there are a few seen-it-before moments, but overall this is a fresh (if anything in the underground morgue location can be called fresh) take on ghoulishness. If you are remotely of a nervous disposition, do not watch. . But if your thing is having your heart stopped every five minutes then you'll love it.

Not your Average Autopsy Movie . - The Autopsy of Jane Doe review by porky

Given that we start with Mass killings and an Autopsy of an Unknown girl it is pretty sure to expect he movie to follow convention and try to find the Murderer or Serial Killer before they strike again....Well this is no Ordinary Autopsy Movie....

I Loved the way the Story went in a Very different direction than was expected and is usual when you start a story this way.

Truly creepy moments. Confusing and twisted, its not what you expected at all ..

Certainly Watchable . Good to give you the creeps if you are alone .

OK - The Autopsy of Jane Doe review by ZE

Good film with plenty of spookiness and jumpiness. Nice and dark set giving the right amount of creepiness!

I was just left wondering at the end what the point was though. Good tale but not much point to it and left with questions.

Worth a watch if you like blood and guts

Could have been so good. - The Autopsy of Jane Doe review by HH

I enjoyed the first half hour or so of this film, and the acting was really good, but as the story unfolded I found myself getting bored and the ending was very poor.  Didn't scare me at all.

Quietly unsettling ... - The Autopsy of Jane Doe review by NP

This begins well, and certainly features some excellent performances, but at some point during the first half it becomes apparent that not a lot is likely to happen; the storyline is pretty thin. A few too many ‘jump scares’ attempt to liven things up, but it isn’t until later that things begin to get more interesting.

A claustrophobic, effective horror that is never terrifying, but quietly unsettling. My score is 6 out of 10.

I have to admit I don't much enjoy modern american horror so this was always going to be a gamble for me, but the premise sounded interesting enough for me to check out. It started well with a suitable slow, creeping dread but soon devolved into predictable jump scares and fairly well-worn horror cliches. Having tempted Brian Cox into the fold, I was hoping for more from the script - I winced seeing such an accomplished actor spouting pretty terrible horror movie dialogue.

The Autopsy of Jane Doe is directed by the same guy who gave audiences the criminally underrated and creatively great Trollhunter, a film about a man, his handheld, and a potential troll lurking the Norwegian woods (the guy’s name is André Øvredal). Now, André wants to make you uneasy, reclusive, and repulsive in The Autopsy of Jane Doe, a film where nothing is as it seems – at first. And so, the latter film greatly encapsulates all aspects of a modern neo-thriller, including uneasiness, mystery, creepiness, and a great deal of thinking that one should look elsewhere and off the screen. In light of this, The Autopsy of Jane Doe succeeds on all possible levels.

First, let’s address the dialogue. The Autopsy of Jane Doe (and its screenplay) does a great job of building characters and connecting character chemistry right from the get-go. Compared to the recent horror/thriller offerings where good and believable character development is thrown aside for some cheap thrills and the evergreen jump-scares, this film takes its time instead and makes something wonderful happen – people talking. In fact, the dynamics between the father and the son and so well executed that one can’t do much else but applaud the director for keeping things real. That, and the fact that they have very different attitudes about how to approach an autopsy builds conflict, pushes the story forward, and makes other films of the same variety look silly, rushed, and underdeveloped all at once.

But, as with all things in life, The Autopsy of Jane Doe is not without its fair share of flaws. These flaws are not casting a shadow over the experience, but nullify some things the director had previously built up and pull down the overall uneasiness by a notch. For instance, there a several jump-scares midway that showed little to no originality or punch. This would’ve been fine if the tone of the film wasn’t so darn good in the first place. After these schlock-scares happen however, the tonal difference between the first and the latter half of the film seems jarring, inconsistent, and makes André look like he had his fair share of influence from contemporary horrors such as The Conjuring, or any similar alternative your local theater nowadays offers. But, to the filmmakers’ credit and despite all of these flaws, somehow they still manage to pull it off and make The Autopsy of Jane Doe a genuine movie-going experience that’s still better than most horror films today.

In conclusion, if you’re the type of person who wants character development, character conflict, and everything the word ‘character’ entails in a handily crafted film, then The Autopsy of Jane Doe would be right up your alley.