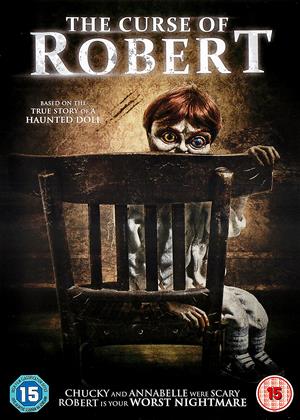 Synopsis:
Emily Barker is a cash strapped student trying to make money as a cleaner, working nights at the East Falls Museum. But her peaceful graveyard shift turns into a time of terror when she discovers that one of the exhibits, a creepy vintage doll named Robert, is alive and wreaking havoc after hours. When members of the night staff turn up dead in sinister circumstances, a local police detective points the finger of suspicion at Emily. Can she convince everyone of the truth behind the murders and clear her name? Or will she too fall victim to the Curse of Robert the Doll?
Actors:
Nigel Barber, Lee Bane, Tiffany Ceri, Suzie Frances Garton, Chris Bell, Bobby Cole, Clare Gollop, Steven Dolton, Felicity Boylett, Jason Homewood, Claire Henderson, Christopher Hale, Richard Burman, Kira Brown, Shelly Brown, Sophie Cole, Andrew Williams, David Bridle, Kate Piper
Directors:
Andrew Jones
Producers:
Andrew Jones, Lee Bane, Robert Graham
Writers:
Andrew Jones
Aka:
The Curse of Robert the Doll
Studio:
4 DVD
Genres:
Drama, Horror

Reviews (1) of The Curse of Robert

Spoilers follow ... - The Curse of Robert review by NP

You may be familiar with ‘Chucky’, and ‘Annabelle’ too – murderous dolls who seem to take on a life of their own. This is actually a sequel to the earlier ‘Robert (2015)’, although it works perfectly well viewed in isolation.

Pretty young Emily Barker (Tiffany Ceri) begins a nightshift as a cleaner at East Falls Museum, which takes on an eerie atmosphere in the darkness, what with its mannequins, human-like dummies, and an allegedly ‘haunted’ doll called Robert. He’s a creepy looking toy, with his mismatched eyes and permanent sneer/grin. As grumpy Security Guard Stan (Christopher Hale) soon finds, Robert is also a dab hand at murder. Luckily for Emily, handsome nice guy Kevin (Jason Homeward) is also on hand.

This is another project from the horror stable of Andrew Jones, and contains a subtle reference to his earlier ‘Poltergeist Activity’, which also featured a malevolent doll. As productivity increases, Jones’ films show signs of getting better all the time – for example, the standard of acting and sound quality is much better than some of the earlier offerings. One constant that remains, happily, is Jones’ skill at writing his characters – there are no stereotypes here (not even Stan), no petulant bored teens or posturing cardboard, one-dimensional characters. Here are likeable, relatable, real people placed in a very unreal situation. Therefore, we like them and feel emotion when events conspire against them.

The low-budget notion of a malevolent toy coming to life is as frightening or as ridiculous as you would wish it, but Robert’s appearances are brief enough to avoid unintentional hilarity. The spirit of Robert Crow, murdered by his father, inhabits the little bloke, and the owner of the museum (Nigel Barber) knows this – and with the intimidating lack of non-co-operation from the police, Emily and Kevin take events into their own hands.

This all depends on whether you find dolls frightening. If so, this works well – everything is employed to make their broken little porcelain faces, their sightless glassy eyes and their leering grins as unnerving as possible. Lee Bane, without whom no Andrew Jones film would be complete, plays the Toymaker. Sadly, his ‘old man’ make-up is less convincing than anything Robert or his friends bring to the table.