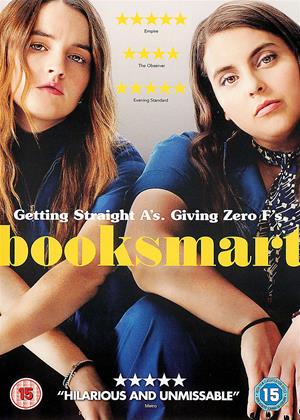 This is a film about 2 girls who think that they have lost out on all the fun at school by working really hard and so decide to join the cooler crazier kids for one night before graduation.

It is pretty good, feels more like an indie film and a modern take on the 80s teen film genre although it all felt too politically correct to me and this tone prevails throughout. Don't get me wrong, there are some funny parts and good performances, I just don't think I am target audience. I liked it as the girls are nerds and they ultimately gain the support of their classmates after some funny exploits. There are some other quite amusing characters which evolve with the film too other than the 2 main parts.

Not terrible at all, just not great in my opinion.

Overall i enjoyed this. It's more than a teen comedy . Like a mix of an indie film & mainstream film it's a bit offbeat & gets better & more amusing as it goes along.

A smart, ultra-fresh take on the high school comedy - Booksmart review by IR

Love this. Razor-sharp script, lovingly delivered with real pathos and style by the two leads and by every fully fleshed out supporting character.

Do we truly need yet another coming of age high school story? Yes we do, it seems, when it has this much to say about friendship, pre-judging, righteousness and all that pent up teenage angst.

I starting laughing within the first 15 seconds and basically didn't stop.

Too much like The show “Girls” - Booksmart review by RC

Wanted so much to like this but found it quite boring. Got to a scene which felt like a “Girls” scene slightly rewritten and could  watch no more because it gives the feeling that more scenes have been lifted from other shows which for me makes a film not worth watching. Of course this idea is unproven but the scenes side-by-side look quite convincing.

If anybody wants to check this - the conversation is about an  Electric Toothbrish with the main characters in this film and in Series 5 Girls where Hannah has a similar conversations with Tally. Though not the same words are spoken the “humour” and theme is too close for me for enjoy this film without remembering that it is a script which somebody (who probably likes “Girls as much as I do) has written. So i couldn’t get lost in the plot and enjoy the film like I would with other films.

This is a teen high school comedy that is just ok. Perhaps as a man hurtling towards 40, I’m not the target audience, but I really don’t understand the critical praise for this movie. The main problem is that the first hour (at least) is a non-stop barrage of whackiness and pratting around and it is all just too much so at no point did I have a chance to feel that any of the characters were real people. It seemed to just be throwing everything at you in the hope that some of it might be funny; and yes, I did laugh a few times, but really I only found about 5% of the ‘jokes’ to be funny. Ok, comedy is subjective, and I’m sure other people would laugh more than I did. Perhaps the lack of engaging storyline was the reason for the over the top nonsense that was constantly occurring – the actual plot of this film could have been told in a 15 minute short.

One real positive is the performances and chemistry of the two leads and I genuinely believed in their friendship. Also I suspect part of the acclaim of Booksmart is due to it’s woke nature (one of the characters is gay, and nobody minds!) and that is genuinely progressive and good to see. But sadly that alone doesn’t make it a classic. Throughout the film Booksmart treads a similar path to a million other teen comedies – the outcast nerds trying to be with the cool crowd, the house party with a swimming pool (where almost nobody appears to be drunk after 4 hours of partying) and there is even a bit in which one person throws up on another! How many times have I seen that scene?! There really wasn’t much here that I found new or exciting.

Like all high school movies it becomes all serious and earnest in the final act, with the graduation speeches of how we had the time of our lives and even though we are different, we’re all friends after all etc. Often times this can have a touching and moving effect, but in this case it just seemed to be going through the motions as I really didn’t know or care about any of the characters – particularly the supporting cast who I found to be a gaggle of clichés and unfunny morons.

If you want to know how to make a high school teen comedy - study Mean Girls. This is the gold standard of the genre (sorry Clueless and Ferris Bueller). That movie too has weird, 'oddball' performances but it also shows people acting relatively normal occasionally, and therefor the viewer can empathise with the character’s story. The comedy is not over the top, but perfectly timed.

Overall Booksmart has two good lead performances and a handful of funny gags, but for me there way too much supposed ‘comedy’ and not enough of an interesting story to be considered anything above average.

A good addition to the genre - Booksmart review by RJ

Booksmart is not a work of dazzling originality - then again, I would be surprised if anyone renting it was expecting it to be. I confess that I am a bit of a sucker for American high-school-coming-of-age films, and for me their familiarity is part of their appeal. There are many films I watch because I want to be challenged, so for a bit of balance I like to watch the occasional film that absolutely doesn't challenge me, but does entertain me - Booksmart fits that bill.

It has a plot you have seen before; characters you have seen before; situations you have seen before - therefore it lives or dies on the strength of its script, performances and direction, all of which - in my opinion - have a pretty high success rate here. At a nice, concise 98 minutes it is punchy, energetic and just about manages to avoid sagging too much at any point. The crucial chemistry between the two lead characters worked well and there are a lot of fun performances from the supporting cast. I was consistently entertained as the film took me on a familiar journey down well-trodden paths - which is all that I could possibly ask of a film in this genre.

Despite me being 50, this film made me want to be 18 again and hang out with this bunch of characters. The dialogue was sharp and witty and all the main characters were strong and likeable. The plot was a little thin, but that didn't detract from the entertainment.

I really could not understand what the characters were saying and the subtitles went too fast.  I could not relate to the characters or the story, and I felt relieved that I had not paid to see this on the big screen.

It probably would appeal more if you were a teenage girl. Some very good acting but in the end you really didn't care what happened to the characters. Three maybe four stars for direction and acting, but nil for the rather silly (though indeed fast-paced), story line.

Girl buddies movie. Endearing, witty and just plain daft. Goes out of its way to entertain with some silly characters. However, it never gives the impression of leaving reality behind so that you lose empathy with the characters. One you can watch with your partner (maybe not Grannie) safely!

Two college girls feel they have missed the racy side of college life so set about a pre-graduation day spree; if only they can find the 'big' party the in-crowd are going to. During the search they discover things about themselves and other people, so gain valuable lessons on life.

Leaves you with a glow that the human race is OK really, maybe a bit gooey. Recommended as a good drama, comedy, life reaffirming movie