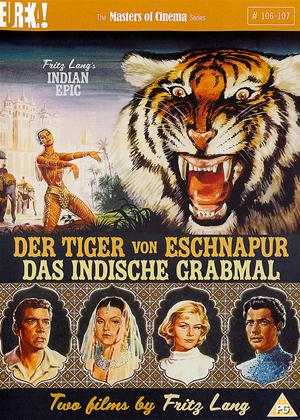 Rent other films like Tiger of Bengal / The Tomb of Love

Reviews (1) of Tiger of Bengal / The Tomb of Love

This sprawling, visually extravagant, and incredibly self-indulgent film (technically it's two films, but it's really one very long film released in two parts) was made at a time when Fritz Lang's greatest movies were more than 30 years old, his health was in decline, and he was rapidly losing his eyesight. He knew his next film was probably going to be his last (though actually he did make one more movie, the third part of the Dr. Mabuse trilogy, released 27 years after part two), so he said goodbye to Hollywood, where he'd never quite fitted in anyway, and returned to his native Germany to film a trashy, long-forgotten novel written four decades previously by Thea von Harbou which he'd nearly made as a silent film in 1921, mainly because at the time she was his wife. Ah well, better late than never!

Nostalgia rules supreme in this magnificent-looking though sometimes slow-moving melodrama about taboo-breaking love between an incredibly manly if somewhat one-dimensional European and an Indian dancing girl who is every Mysterious East cliché rolled into one, though actually she's mixed-race, a plot-point they obviously had to hastily write in to explain why Debra Paget looks so un-Indian. Subtle this ain't! Everyone's a stereotype to the point where having a beard and being evil are the same thing. The (slightly) dusky maiden loves the white he-man because he chased off a tiger that fancied having her for breakfast armed only with a small piece of firewood. He loves her because she's Debra Paget with not much on. But the maharajah loves her too, because if he didn't there'd be no plot. And although he's not really evil, he does have an older brother who expected to inherit his dad's kingdom but didn't, possibly because of his beard...

Lang always loved world-building, and this world of pampered aristocrats living in magnificent palaces built on top of dismal caves where less fortunate people are locked up and left to rot simply because they spoil the view, and whether you live or die is decided by a huge weird-looking idol, is obviously the nearest he could get to revisiting Metropolis on a much lower budget, though unfortunately Debra Paget doesn't have an evil sexy robot twin. Not that she needs one; considering the year this movie was made, her extremely scantily-clad dance number involving a hilariously fake snake really does have to be seen to be believed!

Unfortunately, Lang's so busy showing us all the wonders he can afford, including a considerable amount of location shooting in real Indian palaces (one of which later featured in "Octopussy"), that the story sometimes gets forgotten about, especially in the first film, which wasn't intended as a stand-alone feature and devotes most of its running-time to setting up things that will happen in part two. And even while everything's being hastily wrapped up at the end, half the cast spend quite a while wandering around in tunnels failing to accomplish very much because they've literally lost the plot. It's a ramshackle muddle that meanders all over the place, and some of the acting is less than brilliant, but it looks great, and Fritz Lang is clearly having fun. For which I don't think anyone would blame him. It's not a great film or even a particularly good one, but, like a lot of movies made for no reason except that somebody really wanted to, it's got that personal touch, and that makes it both likeable and, despite its serious flaws, extremely watchable. By the way, if you hate subtitles, there's optional English dubbing.