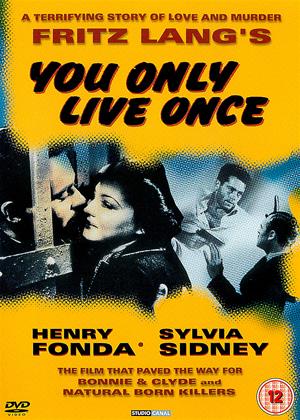 Reviews (2) of You Only Live Once

True Romance - You Only Live Once review by Count Otto Black

Fritz Lang was fascinated by evil, and all his most memorable characters are villains of some sort. In this movie from the start of Lang's American period, a young Henry Fonda proves once again that actors who are usually typecast as squeaky-clean good guys often give their best performances when they're allowed to play baddies. Fonda's performance here, as a man with a seriously dirty past who tries to go straight just a little bit too late, is excellent, making us care about him without actually liking him. Lang cleverly tweaks our perceptions of him so that for a surprisingly long time we're not sure how bad he really is, and we fully understand why many of the other characters react to him so negatively. We're also unsure for quite a while whether Sylvia Sidney, who does a fine job of conveying how passionately she loves this guy, is blinded by her feelings, or is right about the good man she perceives to exist under that rough exterior.

Of course, it all gets a bit more complicated as the story unfolds. Along the way, Lang makes a powerful if occasionally heavy-handed statement about the utter helplessness of individuals who for whatever reason are labeled "undesirables" by the establishment. Even the silly comic business about apples in the opening scene turns out to foreshadow the main plot, since it shows us how easily The Man can walk all over little people. Having seen firsthand the Nazi takeover of Germany, Fritz Lang knew all about that!

In the end, the only true villain in this film is the system, and it's noticeable that almost none of the characters, however minor, are entirely good or bad. Convicts guilty of terrible crimes exhibit more kindness and humanity than "good" people who refuse to admit that the rules they unquestioningly obey might be wrong, while genuinely good people end up having to break the law in order to do what they know is right. And in a pitch-black bit of subversion, the only 100% good man in the whole movie - a saintly stereotype obviously forced on Lang by the Hollywood system, along with the almost-copout in the closing moments - is so morally inflexible that he makes a decision which, if you think it, is spectacularly stupid, and ends up being disastrous for everyone.

As American films from its era go, it's surprisingly hard-hitting and cynical. Certain elements of this movie obviously influenced the even more uncompromising "Gun Crazy" (1950), with which it would make a fine double bill, so much that it's almost a semi-remake. By the way, apart from inspiring its title, this film has no connection whatsoever with "You Only Live Twice".

I'm a Hog For You, Baby - You Only Live Once review by CH

Does it rain more often in the movies than elsewhere? The thought comes to mind again with Fritz Lang's You Only Live Once (1937), the second film which he made after arriving in Hollywood from Germany. It is as imbued with his Expressionist angles as Metropolis and others from the Twenties, and rain suits this as well as faces framed by doorways and sunlight making shadows across the floor as it traverses prison cells.

Before Bonnie and Clyde there was Gun Crazy and, before that, this. All turn equally enjoyable variants upon those lovers who took to the steering wheel and gun, with the tyres squealing as much as their victims. In Lang's case, he has Sylvia Sidney (she had also been in Fury) who works in a Public Defender's office but is smitten, and more, with a habitual criminal Henry Fonda who is soon to leave gaol for the third time. She sees the good in him, but, inevitably, society does not, things slide from hope to despair - a process which provides plenty of excitement, so much so that one cannot help but feel a voyeur of suffering.

The film moves from an unexpectedly comic opening in which a market-stall holder tries to bring a case against a policeman for his daily pilfering of apples while on patrol (nothing comes of that), after which there is a romantic mood as Sylvia Sidney and Fonda light upon a house for sale, complete with garden swing.

Lang keeps up a pace, with time for such symbolic moments as two frogs in a garden pool (it turns out that, like penguins, they mate for life). All of this anticipates noir, with such moments, places and people as gasoline stations (one of which has a till whose design would now command a far greater sum than it contained any single day), rebarbative governors, and, of course, a well-meaning priest (William Gargan) with an Irish accent. And any pane of glass which hoves into a close-up is at risk of being smashed.

At eighty-two minutes, the script (by Gene Towne) contains a great deal, with room for many who have but a minute or two of screen time - such as the couple who run an inn, the husband duly exclaiming, “well, I'll be hog-tied” (meaning: well, I'll be blowed) when looking through his collection of crime magazines and realizing that his hunch was right: they have a jailbird in the honeymoon room.

Despite combing several times through the double columns of Jonathon Green's great three volumes Dictionary of Slang, I cannot find the phrase therein, but I shall make shifts to use it at the first opportunity.