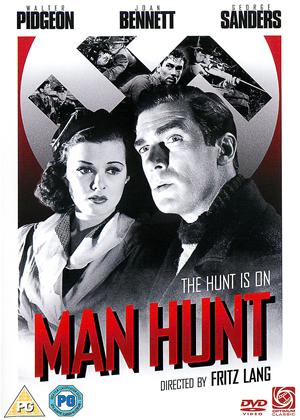 The synopsis given on the main page is, as is so often the case on this site, extremely misleading, and obviously written by someone who hasn't seen the film. Our hero decides to assassinate Hitler because a) it's more challenging than hunting boring old tigers, and b) Hitler obviously deserves to be shot because he's Hitler. Though since Adolf hasn't yet show his true colours by starting a global war, presumably the heroic assassin must have the same psychic powers possessed by Christopher Walken in "The Dead Zone". Anyway, his failure to kill Adolf, the first thing that anybody mentions about this movie and just about the only reason it's remembered, happens roughly two minutes in. Unfortunately there's over an hour and a half still to go.

His escape from Nazi Germany across hundreds of miles of hostile territory, injured, exhausted, friendless, and hunted by the entire Gestapo, was no doubt thrilling, but we have to take that on trust because we only see the last few minutes of this epic journey, presumably because showing us all of it would have needed a much higher budget. In just about no time, pausing only for an irritating shipboard interlude featuring a very, very young Roddy McDowall, he's back in England. Where, despite having recently beaten infinitely greater odds, he's hopelessly outclassed by the mighty undercover task-force the Nazis despatch to London, of whom there seem to be about six. Of course, he can't tell the police because... Actually I've forgotten why not. I think they got the explanation out of the way as hastily as they could to prevent the audience from noticing what a painfully contrived plot device it was.

Despite making almost no sense, if the movie was about a brave but outnumbered man being hunted by ruthless Nazis as implied by its title, it might still be a cracking good thriller. Unfortunately, three-quarters of the film is a cute semi-comic romance between our upper-class hero and some lower-class lady he happens to run into, involving endless incredibly stilted and awkward dialogue, accompanied by a syrupy and deeply annoying string arrangement of "A Nightingale Sang In Berkeley Square" which seems to be stuck on auto-repeat. Then, about 20 minutes from the end, the cast and crew suddenly remember this is supposed to be a thriller about a life-or-death struggle with merciless Nazi spies, not "My Fair Lady" minus the songs, and it gets dark, tragic, and even somewhat thrilling again. But it's far too little, far too late. George Sanders is at his villainous best as the surprisingly English-sounding Nazi who makes the contest personal, but he isn't in most of the film. And John Carradine as another nasty Nazi looks even scarier but has even less to do.

I was reminded of those sci-fi B-movies whose poster promises a rampaging monster, but in the actual movie it only appears on screen right at the end for five minutes if you're lucky. Fritz Lang was a genius, but he had his off days, and he always did his best work when he a generous budget to play with. This is a cheap propaganda film with a staggering amount of padding which for most of its running-time is in the wrong genre. Of course, you can't argue with the point it's trying to make unless you're a Nazi. But good intentions don't automatically result in a good movie.