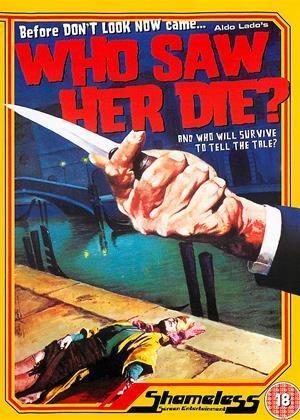 Spoilers follow ... - Who Saw Her Die? review by NP

George Lazenby, in one of his first acting jobs since his solo stint as James Bond in 1969, here looks about ten years older, a lot thinner and less well-groomed. He is excellent as Franco, father to a little sweetheart called Roberta who is murdered. Lazenby has to share the spotlight with the sumptuously filmed streets of Venice, where most of the film is set, and Ennio Morricone’s relentless and sinister chanting soundtrack. The detailed, ornate architecture and glistening misty streets (also used to such good effect in ‘Don’t Look Now (1973)’ and 1989’s ‘Vampires in Venice’) make this one of the most atmospheric of giallo films. The cast of eccentric characters also add to the sense of heightened reality.

As a heterosexual male, I must point out Anita Strindberg (as Elizabeth Serpieri) and especially Dominique Boschero (as Genevra Storelli) as being stunning additions to the cast. It’s difficult to express an opinion on physical appreciation in what is in many ways an exploitation film without being seen to condone such exploitation. I would argue (at tedious length) that exploitation has existed sfor some time in virtually every film – especially mainstream, where anyone under the age of, what, 40 is invited to at least partially undress without unduly bothering any plot-line. Whether or not the approach to displays of flesh differs ‘now’, as opposed to ‘then’, is probably subject for a discussion elsewhere. In ‘Who Saw Her Die’, amongst other films, I like it.

This isn’t flawless – as often happens with giallo films, the pace slackens in the middle, but Lazenby’s increasing desperation keeps things ticking along. The unmasking towards the end and the reveal of the mysterious killer’s identity is satisfying. Recommended.