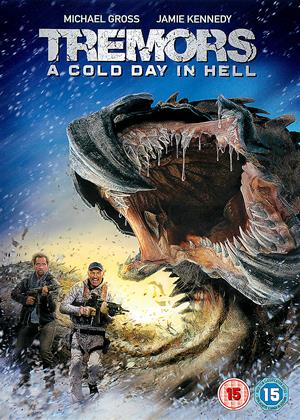 Synopsis:
Burt Gummer (Michael Gross) and his son Travis Welker (Jamie Kennedy) find themselves up to their ears in Graboids and Ass-Blasters when they head to Canada to investigate a series of deadly giant worm attacks. Arriving at a remote research facility in the Arctic tundra, Burt begins to suspect that Graboids are secretly being weaponised, but before he can prove his theory, he is sidelined by Graboid venom. With just 48 hours to live, the only hope is to create an antidote from fresh venom - but to do that, someone will have to figure out how to milk a Graboid!
Actors:
Jamie Kennedy, Tanya van Graan, Jamie-Lee Money, Kiroshan Naidoo, Keeno Lee Hector, Rob van Vuuren, Adrienne Pearce, Francesco Nassimbeni, Paul Du Toit, Christie Peruso, Jay Anstey, Michael Gross, Danny Keogh, Greg Kriek, Alistair Moulton Black, Oscar Petersen, Stephanie Schildknecht, Jenna Upton
Directors:
Don Michael Paul
Producers:
Mike Elliott
Writers:
John Whelpley
Aka:
Tremors 6
Studio:
Universal Pictures
Genres:
Horror, Sci-Fi & Fantasy

Rent other films like Tremors: A Cold Day in Hell

Reviews (1) of Tremors: A Cold Day in Hell

If you've ever seen any of the other films in this series, then you'll know exactly what to expect. If you haven't then I suggest you watch the very first film from 1990 starring Kevin Bacon, which really set the benchmark and is still the best out of the six films made to date! Sadly Bacon isn't in any of the sequels, but the character of Bert Gummer, played by Michael Gross is and he once again reprises his role for this film. There is nothing now, unique or original about this film in any shape or form, it is merely yet another follow on and reproduction of what has gone on before, this time set in Northern Canada. Seemingly aimed at the teenage boys market, with lots of excessive and irrelevant juvenile references to testicles and anuses, the script sounds like it was written on the back of a crisp packet, it's that lame, with the actors throwing in lots of swearing to spice things up a bit and of course the completely irrelevant, unnecessary and quite nauseating romance thrown in for good measure. I'm not quite sure why this has a 15 certificate, as I thought the last few Harry Potter movies were more scary, possibly due to the constant swearing! However in it's credit, although quite obviously a low budget B-Movie, it's all actually quite good fun and doesn't take itself seriously in any shape or form. In all just a good, fun old fashioned monster B-Movie to watch with a couple of cans and your mates on a Sunday afternoon!