Rent Doctor Strange in the Multiverse of Madness (2022) 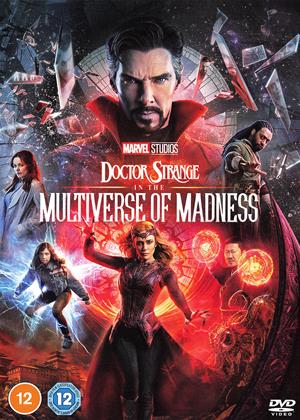 More like Doctor Strange in the Multiverse of Madness

Reviews (2) of Doctor Strange in the Multiverse of Madness

Loved the whole Dr Strange/Multiverse unleashed in the last Spidey movie but this one is a real slog and a bit of a mess.

The plot is back of a fag packet stuff - Wanda (having lost her twins at the end of WandaVision) used her powers as the Scarlett Witch to steal the powers of America (a teenage girl who can open multi-portals at will) to re-create her family.....and that's about it - for 126 minutes....

Strange agrees to protect America and the scene is set for endless battles across mutli-universes ( and by endless I mean endless).

Its just one huge CGI scene after another and as the story never develops beyond that that is all you are left with......ok Olson is good in the part but not really enough to carry the whole film....and when you have cameos from Captain Marvel and Charles Xavier shoe-horned in it all gets a bit desperate..

The film is saved by Raimi's full throttle direction with the final third crammed with his trademark slapstick horror stuff that does provide some comic relief but overall was rather glad when the end credits hove into view.

I know it got good reviews and it made a fortune at the box office - I just found it a minor entry in the MCU....3/5

To make sense of who anyone is, and what kind of character they are, you have to have seen the first film - and pretty recently - plus various other Marvel products. If you don't have that background you'll soon tire of the fighting (which starts in the first second and continues seemingly endlessly) because you won't care who wins. That will give you time to 'marvel' at the CGI which no makes no pretence at even semi realism - it looks like a comic. I guess that should be little surprise but frankly Hanna Barbera could have made it look better. My heart goes out to Benedict Cumberbatch who must need the money.

Part of what makes the Marvel Cinematic Universe worth returning to with most entries is the promise of a different type of genre. With Black Panther, we got some of the lesser filmed genres of Afrofuturism. With Guardians of the Galaxy, we got the commercially friendly yet giddy misfit staging of a space opera. And now with Doctor Strange in the Multiverse of Madness, we have some horror or at least the closest that the MCU will ever get to horror.

Doctor Strange (Benedict Cumberbatch) returns as a much different sorcerer since his first Marvel movie in 2016. Since that film, he’s endured fighting aliens in Infinity War, being blipped out of the universe for five years in Endgame, and tackling the tampering of the Multiverse during Spider-Man: No Way Home. Now, finally back to taking center stage, the aged sorcerer has gone through some changes. In addition to his hair being more salt and pepper, he’s lost his major role as the sorcerer supreme, having the role taken over by the more charismatic Wong (Benedict Wong). He’s also lost his chance with the love interest Christine (Rachel McAdams), having to endure her wedding with a reserved yet gracious nature. He could really use a chance to prove himself that he’s gotten beyond being haunted by the past.

That chance comes when his universe gets an unexpected visitor, America Chavez (Xochitl Gomez). This teenage girl has the power to dash through many universes but doesn’t quite understand how she can wield such power. All she knows is that a lot of people want her power and they’re willing to kill anybody or any universe to get to her. Having proven to be a solver of teenage problems since No Way Home, Strange commits to defending her from any dangerous force that seeks to harm her.

One of those forces just happens to be Wanda Maximoff (Elizabeth Olsen), aka Scarlett Witch. She still hasn’t gotten over the events of WandaVision and is seeking to find a universe where she still had her children. If that means killing a teenager and multiple heroes to gain that power, she’s more than willing to do it. Strange and America find themselves fleeing from her brutal violence as they seek a means of trying to stop the collapsing of the Multiverse.

Style-wise, this movie rocks. It takes some bizarre trips into strange worlds of surreal horror. Wanda’s rampage is aptly portrayed with director Sam Raimi’s penchant for over-the-top creepiness with a tongue in cheek. The many wild zooms and dutch angles give this film a lot of character. It almost makes up for the lack of, well, character.

Consider how little time we get to know America Chavez. She’s so desperate to flee from the next villain that we barely get a moment of her sharing a moment with Strange. Rather than take a break to get to know each other, there are weirdly lazy means of divulging their pasts in a way that robs them of being honest on their own terms. We learn about the backstories of Strange and Chavez in the most awkward of ways, where it feels like their plight is more pushed in exposition than a development of their personalities.

And, yes, there are a whole lot of cameos going in this film, teased by the many promos and trailers that have nearly ruined all the surprises. How can these cameos feel like surprises when we can sense them coming? Even without the promos, the whole “hey, we got these characters” moments are all in one sequence, making the guest stars feel more like an obligatory aside than clever plot development.

Doctor Strange in the Multiverse of Madness works in bits and pieces as a horror movie but still feels as though it could go a bit further. I kept wanting the film to go the extra mile of weird, which it nearly does by throwing dark magic, demons, zombies, bizarre deaths, and magic involving music into the mix. While I ultimately enjoyed this picture and will most definitely appreciate its many moments of Raimi horror, there will always be this lingering feeling that it could’ve been a whole lot more.