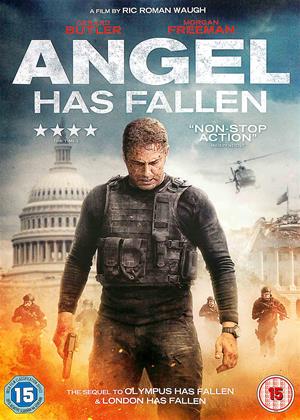 Reviews (9) of Angel Has Fallen

ANGEL HAS FALLEN - Angel Has Fallen review by jc

When there is an assassination attempt on the President,

The Secret Service Agent Gerald Butler is wrongly accused and taken into custody,

He managed to escape from his capture the FBI find real treat to the US President and takes action.

After a treacherous attack, Secret Service agent Mike Banning is charged with attempting to assassinate President Trumbull. Chased by his own colleagues and the FBI, Banning begins a race against the clock to clear his name.

Took a while to get going but really enjoyed this movie. Lots of action and strong lead character with plausible script made this very watchable.

Strongest in the franchise - Angel Has Fallen review by PC

It's hard to believe that are there are three films in this franchise, the first one was clearly inferior to White House Down and the second was borderline racist. However, this has more humour and really benefits from Nick Nolte as Gerard Butler's Father. It is still very violent but even these are more effectively executed.

The issue I have with films like this, is the blatant American Egotism, the false belief that they are 'The Greatest Nation on Earth' and 'Leaders  of the Free World' (sick)! So of course when a terrorist group want to strike at the Heart of Democracy, where else to go, but America of course and who to target but the American President, who in reality is just one of many world leaders! In this case it's simply more of the same, with this time for some strange reason, Morgan Freeman playing the part of the President, when previously it was Aaron Eckhart. What is closer to reality however, is the idea that certain Business interests are manipulating Military Contracts for their own gain and that people can actually cause war for profit, which of course we already know they do! The storyline is not new or original, it's been covered so many times before and so much better as well. This is an ok action movie, which is a bit slow in parts and very slow to take off, but builds towards the end. But it reminded me of so many other much better movies. This is really just another film in the series and personally I have always found the Idea that Americans liken The Whitehouse to Mount Olympus, mythical Home of The Gods, quite arrogant and farcical, but hey that's America for you!

This third entry in the Fallen series is less spectacular than the first two because this time Gerard is on the run rather than fighting destruction and chaos. Apparently everyone involved wanted something different. Mistake. This lacks the dynamic of the first two films. Even worse is a different director (Ric Roman Waugh) who uses a hand-held camera to film too close-in on the action, which is then over-edited into a visual mess.

Things do improve as the film progresses, with some surprises along the way (as long as you avoid the trailer and tell-all reviews). And there is some satisfying action towards the end, if not on the scale of the first two superior films. It’s nearly all ruined again by a puerile end-credits coda, but for the most part Gerard holds the film together and it makes an enjoyable watch.

Enjoyed this one, hoping the next one is as good. Liked Nick Nolte's character is very good , and makes a good addition to the story.

Twice as good as the last one. Half as good as a half good action film - Angel Has Fallen review by JD

The last one was a terrible film, so i wasnt holding much hope for this.

And largely thats the case again. Its just cheesy drivel. Films like this are ok if they dont take themselves to seriously - but this does. When you have films like John Wick where we see some proper, serious gun skills and sucker punch showing girls can do it to and Sicario which gives us gritty, believable action and all three every bit as dramatic and exciting (a lot more so actually) than this - I am left at a loss at what they are trying to do with films like this which just revolve around one stupidly OP character.

Our hero cuts through all comers without really showing any skill. They stand looking at him. He kills them. Awesome. Its mixed up occasionally with some hand to hand (where again the badguy stands and waits to be hit), usually assisted by zero light or shakey cam. Lame stuff.

For me there were a couple of saviours that kept me watching. Our lead certainly wasnt one of them.

The inclusion of his dad did take some of the weight of the serious naffness away (its still naff, but so naff it feels light hearted). Thinking about it, i may of turned the film off had he not turned up.

And the shoot out between the police and the more aggressive mercenaries was a tiny glimpse of some proper action. This exciting scene sadly was ruined by focusing on our hero taking out dummies, it really should of made more of a security v mercenary shoot out where the outcome would of hung in the balance or made the presidents predicament more tense. But as it was, no worries superman with his shakey cam and dummies will save the day.

Blaming the Russians was funny, as we know the Russians are to blame to everything we dont we like. Which i think would of been the only thing resembling a joke in the film.

Its just your typical by the numbers hero with token flaws, gets setup then beats all comers to save the day.

angel has fallen - to dire levels. - Angel Has Fallen review by TR

This film is total rubbish. An old overweight CIA agent could would not be able to survive the fights and trauma this character does - and the role is played straight! The action is well done, but american pie, especially the spaghetti western ending, predictable and trash.

Just about every scene is predicatable, the truck chase. pointless and just used for affect. Dont waste your time and money on this. sayonara

A rather lazy and complacent repetition of the earlier films in this franchise. Gerard Butler and an aging Morgan Freeman did their stuff and some of the action scenes were well up to standard. The storyline, however, was tired and stale, no twists or surprises, no fresh ideas and away from the action nothing to engage the viewer.

The third in the Fallen or Angel saga comes grinding to a halt with the same bland staging and tired action as that of the Taken franchise. The colors are drabby and washed out. The action is clunky and poorly shot in a manner of manic cutting and uninspired choreography. The very premise even shares similarities with Taken 3, the way the lead character has been thrust out of being the protector and is now on the run trying to clear his name. If body switching were the shark-jumping of television series, being on the lam should be issued in as the sign that an action saga is past its prime, if it isn’t already a standard.

There’s very little reveal about this tale that I haven’t already divulged in that opening paragraph. Mike Banning (Gerard Butler) is once more established as the tough-as-nails bodyguard to the President of the United States (Morgan Freeman), ready to defend him at any time. But Banning is getting too old for this kind of crap. He has insomnia and migraines which isn’t too surprising considering he watched the White House and London turn into battlefields and survive both. And he has back pain, too! He really is too old for this staggering franchise that is on its last broken legs.

To put a little spring in this franchise’s misaligned steps, a fishing trip turns into a drone strike where Banning is labeled as a culprit. Now he has to go on a chase for the truth to clear his name and it’s just as explosive and routine as it sounds. Banning runs through a hospital trying to stop bad guys. Banning gets into a car chase. Banning calls his wife to say he loves her. And so on and so on. All could be forgiven and exciting if any of this was given some slight bit of style and staging to separate this production from the multitude of excessive vanilla action pictures of dull hero guy goes around killing hitmen and government agents. I’ve seen this so many times repeated in a dozens upon dozens of direct-to-video shlock that Angel Has Fallen slips so far down from being Die Hard at the White House it slides into that bargain bin of garbage action pictures.

Even the film’s most interesting aspect of revealing Banning’s dad to be played by Nick Nolte offers no comfort. In fact, he adds to the tired and groggy nature of this production because, well, this is Nolte we’re talking about. His stumbling of words is soon replaced by explosions right outside his house. This would be absurd if it weren’t for the fact that these Fallen films are already tap-dancing on so much absurdity that Nolte’s estate of explosive vehicles is not just par for the course, it’s a tired scene. You can practically hear the yawn as the explosions are set off and the clunky action resumes.

While the film isn’t as stumbling with Islamaphobia as London Has Fallen, it still makes the bad call of trying to have some fun with current politics. There’s an allusion to how the Russians may be involved in this act of terrorism which would make sense considering the previous pictures targeted Koreans and Middle Easterns as foes. Nope. This is written off as literally being labeled fake news. Ha ha. It’s funny because the film provided commentary that was both pathetic and propagandic.

There’s no point to Angel Has Fallen considering how distant it wants to be from anything substancial and let all its lazy action do the talking. I’m starting to regret having fun with Olympus Has Fallen as sort of ridiculous blender of Red Dawn meets Die Hard. I laughed at that film for its absurdity but now the joke is over and any fun that may have been left in this saga is replaced with muddled messages and dry action. Let this be the fall of the Angel or Fallen saga. Or the Banning trilogy. Or whatever.